Overall trust in news among Filipinos has risen, putting the Philippines among the few countries that have furthered gains made at the peak of the COVID-19 pandemic.

But the higher trust level is accompanied by declining trust ratings of individual news brands, falling interest in news and even news avoidance, according to the Digital News Report 2022 released globally on June 15 by the Reuters Institute for the Study of Journalism.

A total of 2,023 adult Filipinos were among the 93,432 people from 46 media markets in six continents polled online between Jan. 18 and Feb. 2 for what has become the most comprehensive global study of news consumption trends.

The proportion of Filipinos who say they “can trust most news most of the time” has gone up to 37% this year amid a surge of COVID-19 cases around the time the survey was conducted.

The 5-point gain is the second biggest among the seven countries with increased trust levels this year led by South Africa (61%, up 9 points).  Levels of trust are lower in 21 countries and are at a similar level in 18.

However, the country’s trust score still falls below this year’s global average of 42% and ranks fourth lowest among the 11 markets in the Asia-Pacific region. The Philippines started from a low 27% in 2020 when it was first included in the annual study.

GMA Network continues to enjoy the highest trust score among the 15 brands included in the survey (70% who have heard of the brand find it trustworthy), followed again by Manila Bulletin (66%). The Philippine Daily Inquirer and Super Radyo DZBB (both 65%) have climbed to third spot, displacing The Philippine Star (64%), now fourth-ranked. PDI was in fourth spot and DZBB in fifth last year. 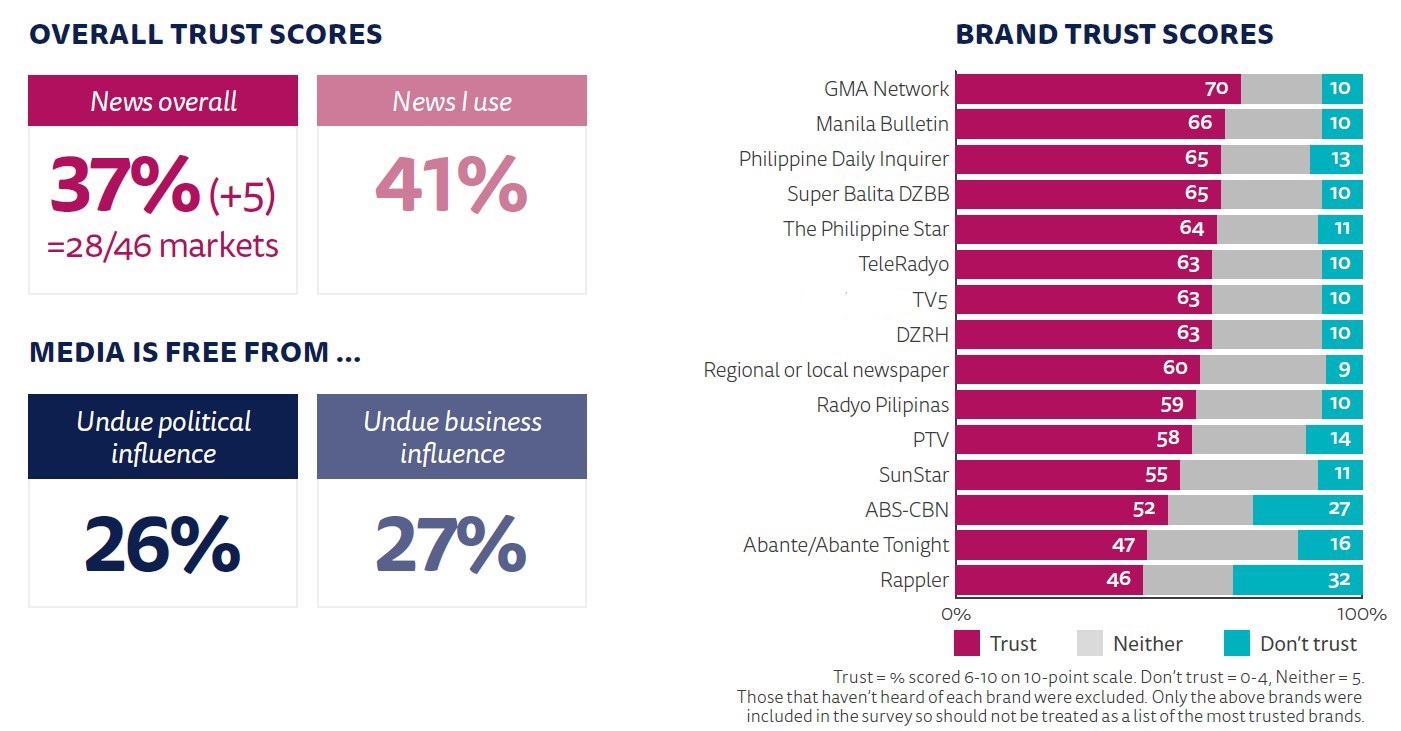 Included for the first time among the brands Filipino respondents were asked to rate as trustworthy or not was SunStar,  a network of community newspapers. SunStar’s score of 55% puts it ahead of ABS-CBN (52%), Abante (47%) and Rappler (46%).

On the whole, trust in news brands has slid this year, save for Abante, DZBB, Rappler and Teleradyo. Abante and Rappler were among the few brands whose trust scores tumbled last year when others were holding steady.

This year’s DNR shows ABS-CBN and TV5 incurring the biggest drop in trust ratings (each shedding 5 points), followed by GMA Network, Philippine Star and local newspapers (each by 4 points).

Like other countries, the proportion of Filipinos very or extremely interested in news has fallen sharply, a global trend which, the report said, “has accelerated despite the continuing COVID-19 pandemic.”

Interest in news is down 10 points to 55% across all age groups in the Philippines. It is lowest among “social natives” (43%), or Filipinos ages 18 to 24 who largely grew up with the social, participatory web. Interest among “digital natives,” or those ages 25 to 34 who largely grew up in the information age but before the rise of social networks, is also below average (51%).

In general, Filipinos express the greatest interest in local news (59%), followed by news about the coronavirus (53%), climate change and the environment (52%), and politics (51%). By age groups, however, social natives are most interested in education (48%) and culture (37%), the survey shows.

DNR 2022 tracked news avoidance—rationing or limiting one’s exposure to news—among an average of 38% of adults in the 46 markets. The figure is higher in the Philippines: 47% often or sometimes turn away from news, jumping to 75% if the proportion of Filipinos who occasionally avoid news is added.

News avoiders in the country say they are put off by “too much” news (57%), especially too much coverage of subjects such as politics and the coronavirus (44%), as well as news that have a negative effect on their mood (32%), and unworthy and biased news (31%).

In fact, a third of Filipinos question the independence of news organizations from undue political and business interests, according to DNR 2022. Only a little over a fourth believe in their independence.

More Filipinos also say that all or most news organizations put commercial interests (37%) and political interests (34%) ahead of what is best for society (30% and 28%, respectively).

These days, 73% of Filipinos turn to social media for news, their consumption being the fifth highest among the 46 markets surveyed. More than half of them (56%) also use social media, messaging or email to share news, up from 47% the previous year.

But TV news viewing still commands a sizable 60% of adult Filipinos. According to this year’s report, GMA Network remains the most accessed brand on a weekly basis offline (57%) and online (51%), followed by ABS-CBN (41% both offline and online). Before its free-to-air stations were shuttered in 2020, ABS-CBN had cornered a 60% following offline and 54% online.

When looking for news online, the survey found Filipinos paying most attention to not only specific brands (44%) but also specific journalists or commentators (40%).

Unlike in other countries where its share of news consumers has been waning, Facebook remains the mostly widely used platform for news in the Philippines. Almost three-quarters (73%) of Filipinos still rely on it for news.

TikTok, however, has emerged as a significant new player, used by mere 2% for news in 2020 and now by 15% in the Philippines, which now ranks third among the 46 markets in usage of the video sharing platform for news.

A number of news organizations have correspondingly moved into TikTok. Yet nearly a third (30%) of Filipinos feel the amount of news on the platform is not enough. A slightly higher proportion (34%) think the same of Instagram, also accessed by 15% for news in the country.

“Higher use of social media in general…may be encouraging more video news use,” DNR 2022 said. “These preferences are closely linked to video consumption through platforms such as YouTube, the most widely used video-based platform in our survey.”

Some 57% of Filipinos consume news via YouTube, the highest among the 46 markets.

Concern over online misinformation has eased somewhat among Filipinos: 56% say they worry about identifying what is real and fake news online, down from 59% from a year ago.

The Philippines, however, is one of three countries where political misinformation (64%) is more widely seen than doubtful claims around COVID-19 (61%). This is no surprise: The DNR survey was conducted some three months before the May 9 general election, which was marked by a high volume of disinformation.

Yvonne T. Chua is an associate professor of journalism at the University of the Philippines. She wrote the profile on the Philippines for the Digital News Report 2022.