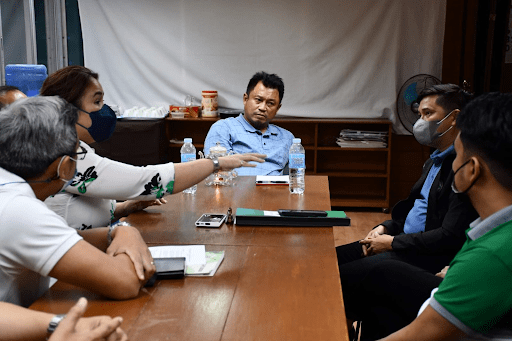 Gov. Pryde Teves with representatives from NGCP, NORECO II, and Brgy. Palinpinon, Valencia discussing how to settle the purchase of lots for transmission and substation construction. | CONTRIBUTED PHOTO

DUMAGUETE CITY – Parts of the province of Negros Oriental have started rotational brownouts in recent weeks owing to the lack of power supplied by the National Grid Corporation of the Philippines (NGCP).

Negros Oriental Gov. Pryde Henry Teves expressed concern over the expected rotating brownouts particularly in the southern part of the province due to a pending land existing deal in Palinpinon, Valencia.

Teves said representatives of NGCP and Negros Electric Corporation (NORECO II) sought help from his office to settle or intervene in the land negotiations to fast tract purchase of the lots where high voltage 138 KV transmission lines and substation will be constructed.

If not settled soon, the governor warns of more frequent power outages, especially in this city where new businesses have recently opened, needing more power from the grid.

As of writing, NGCP explained to Teves that NORECO II’s distribution area now has a peak power demand of 63MW, higher than the current supply capacity of only 56MW. “They (NGCP) have no choice but to have rotating brownouts because of the lack of power supplied to the (southern part) province,” the governor said in a mix of English and Bisaya.

Teves, however, clarified that there is enough power supply for the entire province, but the problem is in the infrastructure needed to transmit power from generators to the local distributors.

A landowner, who requested anonymity, told PressOne.PH that they were reportedly offered a “dirt cheap” P25 per square meter for properties originally purchased at a minimum of P1000 per square meter. The affected areas are now highly residential and where some of the province’s top mountain resorts are located.

The Negros Oriental Chamber of Commerce and Industry (NOCCI) and lot owners suggested “rerouting” their plant to a safer and higher ground.

Teves recommends that NGCP, NORECO II, and officials of Barangay Palinpinon again meet and discuss the effects of the rotating brownout. “NGCP can give a budget of the project to the affected barangay through their CSR (Corporate Social Responsibility) projects,” he told reporters. – Ryan Christopher J. Sorote