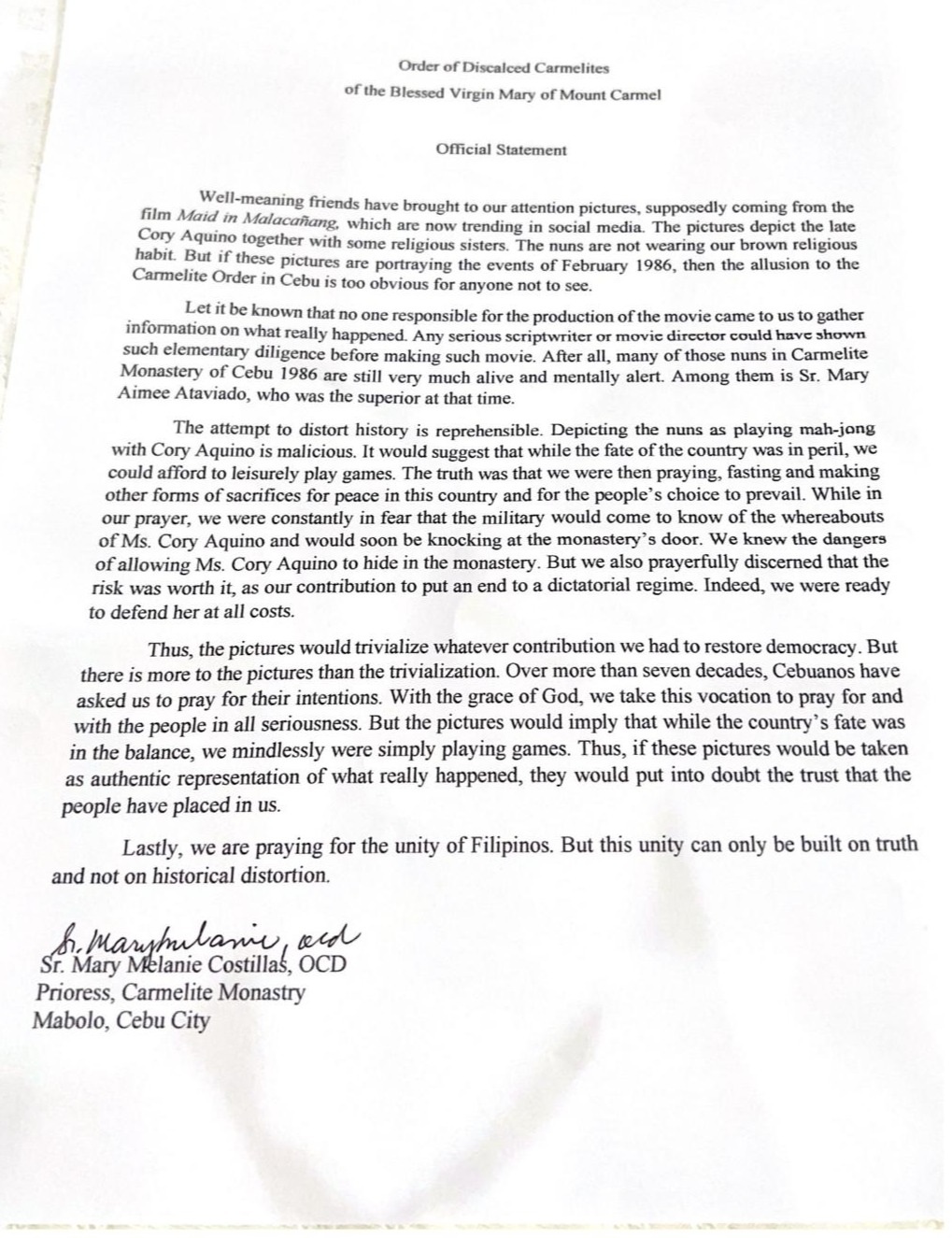 The Carmelite nuns in Cebu City described the depiction of the late former President Cory Aquino playing mahjong with their fellow nuns in the film ‘Maid in Malacañang’ as “malicious” and an “attempt to distort history.”

The nuns, through Archdiocese of Cebu spokesperson, Msgr. Joseph Tan, made the statement on Tuesday, Aug. 2, 2022.

Sr. Mary Melanie Costillas, OCD, prioress of the Carmelite Monastery in Mabolo, Cebu City, said in the statement that they were not consulted by the producers of the film.

Since the release of the film’s trailer, netizens, particularly Cebuanos took notice of the scene where the late democracy icon was playing mahjong with nuns, which alludes to the former president’s stay with the Carmelites in Cebu towards the end of the Marcos regime.

Though the nuns in the film were not wearing the signature brown habit of the Carmelites, the community decided to release a statement after friends and the media sought their reaction.

“Let it be known that no one responsible for the production of the movie came to us to gather information on what really happened,” the statement said. “Any serious scriptwriter or movie director would have shown such elementary diligence before making such movie.”

Costillas said many of those nuns who were present when Aquino sought refuge with them in February of 1986 are still alive. Among them, she said, is Sr. Mary Aimee Ataviado, the community’s superior during the events.

The Carmelites clarified that they do not have time to play and the “attempt to distort history is reprehensible.”

“The truth was that we were then praying, fasting and making other forms of sacrifices for peace in the country and for the people’s choice to prevail,” the statement reads.

“We knew the dangers of allowing Ms. Cory Aquino to hide in the monastery. But we also prayerfully discerned that the risk was worth it, as our contribution to put an end to a dictatorial regime. Indeed, we were ready to defend her at all costs.”

The nuns stressed that they take their “vocation to pray for and with the people in all seriousness.”

The scene has “trivialised” whatever they have contributed to “restore democracy” during those turbulent times, the Carmelites said.

“The pictures would imply that while the country’s fate was in the balance, we mindlessly were simply playing games,” she said. “If these pictures would be taken as authentic representations of what really happened, they would put into doubt the trust that the people have placed in us.

A few hours after the nuns’ statement, the film’s director, Darryl Yap, responded by inviting the nuns to watch the film “if they (nuns) are ostentatious about details.”

“I don’t think there is a need for this “ouch” and “involvement.” Yap posted on his social media page. “Nung pinaalis ng bansa ang Pamilyang Marcos, Wala po si President Cory sa isang Monasteryo (When the Marcos Family were sent out of the country, President Cory was not in a Monastery).”

Yap said there is nothing wrong about mahjong mostly played to pass time and among friends.

In the film, he said, the nuns were not wearing the brown habit of the Carmelites and any other reference pointing to them. “Walang binanggit na ‘huy mga Carmelite sisters, ano na?”

“Pero kung talaga dapat po ikinunsulta ko ang paggawa ko ng pelikula, hihingi ako ng advice kay VALAK, kung paano, kailan, at kanino siya kumukunsulta” (But if I need to consult them in my making my film, I would ask advice from VALAK how, when, and to whom he/she should consult).”    Valak was the demon who appears as a nun in the Hollywood horror films “The Conjuring 2” and “The Nun”.

“We have to learn to read things according to their genre,” Tan said. “Watch it as you would watch any other movie. Don’t overreact.”

However, though he has not seen the film, he said there might be a little “infotainment” (information and entertainment) in the film but emphasized that it shows more “entertainment than information.”

It is not the first time that a similar controversy cropped up, he said. A few years ago, the Church was also asked to respond to the allusions presented in the novel ‘Da Vinci Code’ where author Dan Brown described Manila as “the gates of hell.”

However, Msgr. Tan clarified that the Archdiocese of Cebu would not be releasing a statement concerning the film ‘Maid in Malacañang’ because “it does not affect” the local Church “directly.”

“We don’t want to provoke anyone by coming up with an unwarranted statement,” Tan said as media liaison officer of the Archdiocese of Cebu.

The priest describes the Chinese game as a “morally neutral game” done mostly for entertainment and for some to protect them from degenerative illnesses like Alzheimer’s disease.

“What is wrong is to play mahjong in a gambling situation,” he stressed. – Ryan Christopher J. Sorote