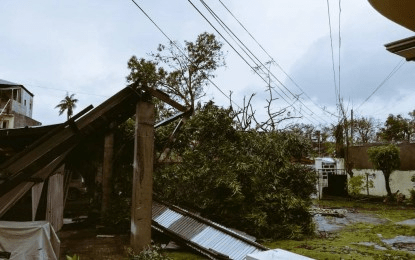 A house in Legazpi City shows the damage caused by Typhoon “Tisoy’s” strong winds. The provinces of Albay and Sorsogon and Naga CIty are under a state of calamity. (PNA photo)

Typhoon “Tisoy’s” landfall in Gubat, Sorsogon early this week left far-reaching havoc in Bicol which placed the provinces of Albay and Sorsogon, and Naga City under a state of calamity.

Claudio Yucot, regional director of the Office of Civil Defense (OCD)-Bicol, bared that “Typhoon Tisoy has ravaged the entire region on December 2 and 3, causing damages to infrastructure, agriculture, and vital livelihood.”

Sorsogon has initially estimated the damages in agriculture, livestock and fisheries at P667 million while “We are still waiting for the report from other provinces,” he said.

President Rodrigo Duterte is expected to be in Legazpi City Friday for an ocular inspection of the damages caused by the typhoon.

Disaster rescue teams assisted in the possible evacuation of residents found in low-lying areas affected by the dam’s release of water.

100 Agta natives, who reside in the flooded villages in Ilagan City received hygienic kits, towels and snacks plus free lunch during a mall event.

In Laguna, some affected families continue to stay in different evacuation centers while others have gone back to their respective homes.