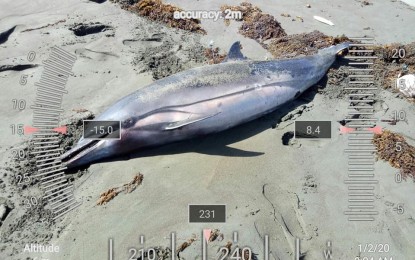 The dead dolphin lying on the shore of Cantilan town, Surigao del Sur (Photo from the Municipality of Cantilan Facebook page)

A striped dolphin known locally as “lumod” was found dead Thursday morning near the shore in Cantilan town, Surigao del Sur, according to the local government unit (LGU) of Cantilan.

The dead dolphin was discovered by a couple from Linintian, Cantilan town.

The dolphin measured 2.18 meters long and a maximum girth of 60 centimeters.

A Facebook post by the Cantilan Fisheries Pride Campaign (CFPC), stated that the corpse of the dolphin, with scientific name Stenella coeruleoalba, bore several wounds. The CFPC suspects the wounds might have been made by a fish locally known as “kome.”

An autopsy was performed on the carcass.   Block notches were also found on the dead dolphin’s lungs and kidney.  The stomach of the dead dolphin was clean from plastics. (RJ Espartinez)