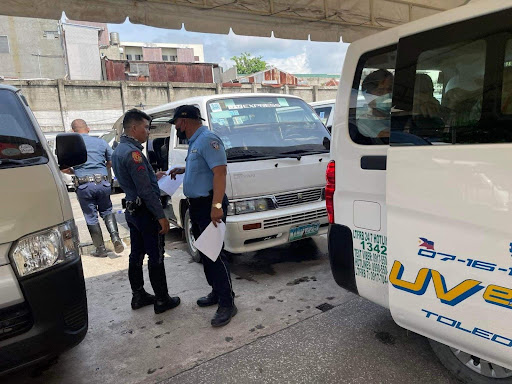 Operatives of LTO-Central Visayas and the Highway Patrol Group in a surprise road safety inspection at a terminal in Cebu. | CONTRIBUTED

The Land Transportation Office (LTO) in Central Visayas has issued a verbal warning to operators of at least 14 public utility buses for failure to ensure roadworthiness and compliance with safety standards of their vehicles.

The inspection is part of the agency’s preparation for the influx of travelers for the observance of All Saints and All Souls Day.

Victor Emmanuel Caindec, chief of LTO Central Visayas, said they conducted a random inspection of public utility vehicles (PUVs) in major terminals in the region to prevent road-related accidents during the long weekend.

“We have recorded 14 buses that failed our roadworthiness test and asked them to return to their garage and fix the issues before they operate again,” said Caindec.

In their inspection at Cebu City’s South Bus Terminal Tuesday, the LTO, along with the Land Franchising and Regulatory Board (LTFRB) 7 and Highway Patrol Group (HPG) 7, found five buses that failed the inspection.

“We are not yet issuing them anything but rather giving the operators and drivers the chance to correct the defects during the inspection,” the director said.

Caindec reiterated that the objective of their random inspections is to ensure that public transportation is safe and in compliance with the national government’s “OPLAN Biyaheng Ayos!: Undas 2022” from October 27 to November 4, 2022. – Ryan Christopher J. Sorote