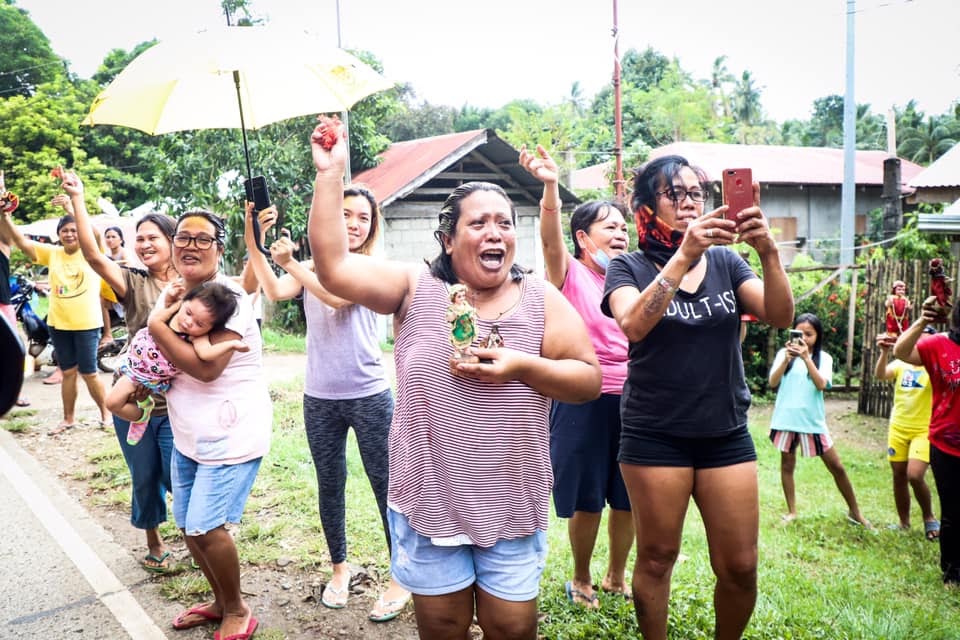 Pictures courtesy of Diocese of Maasin

After over three decades since it went missing, the image of Santo Niño de Malitbog of the Diocese of Maasin returned home, Saturday, Nov. 28.

Devotees of the Child Jesus went to the streets amid the rain to greet the long-lost Sto. Nino returned by antique collector Francis James Ong of Marikina City, who bought the image in 2017.

“It is indeed with great joy and gratitude that we and the Diocese of Maasin and this Cathedral Church of Our Lady of the Assumption, welcome back the Sto. Niño de Malitbog,” greeted Maasin Bishop Precioso Cantillas in a short ceremony before the motorcade to Malitbog town.

Cantillas likened the image’s return to the gospel story of the finding of the lost Child Jesus by Mary and Joseph in the temple.

“I recall this event because this is precisely what we feel here in the Diocese of Maasin that we are so grateful to God. We were anxiously searching for you (Sto. Niño) when you were lost,” the bishop said.

“Our happiness could not be fathomed! Instead of finding Jesus, He found us! He returned home to be with us,” Cadayona said in his homily.

Cadayona said he hoped the image would remain in Malitbog for good. It went missing after a festive celebration of a contingent from the town that won Cebu City’s annual Sinulog festival, more than three decades ago.

“From now on, we would never abandon you. We would never leave you. We will never take for granted your presence with us. Because if we forget, we will suffer the consequences,” the monsignor said.

“Without having you here on this very day, we have no reason to celebrate kaplag again. Since you are here, okey-kaayo,” Handaya said.

The image of the Child Jesus will be under the care of Parish Property Custodian Fredo Tampus, who will have the keys to the urna, where the image is kept.

A traditional Sinulog dance was held after the Mass. The Sto. Nino will be formally enthroned on Nov. 29, the first Sunday of Advent. Ryan Sorote