Lipa, Kalookan, Lingayen-Dagupan prelates in the running to replace Tagle 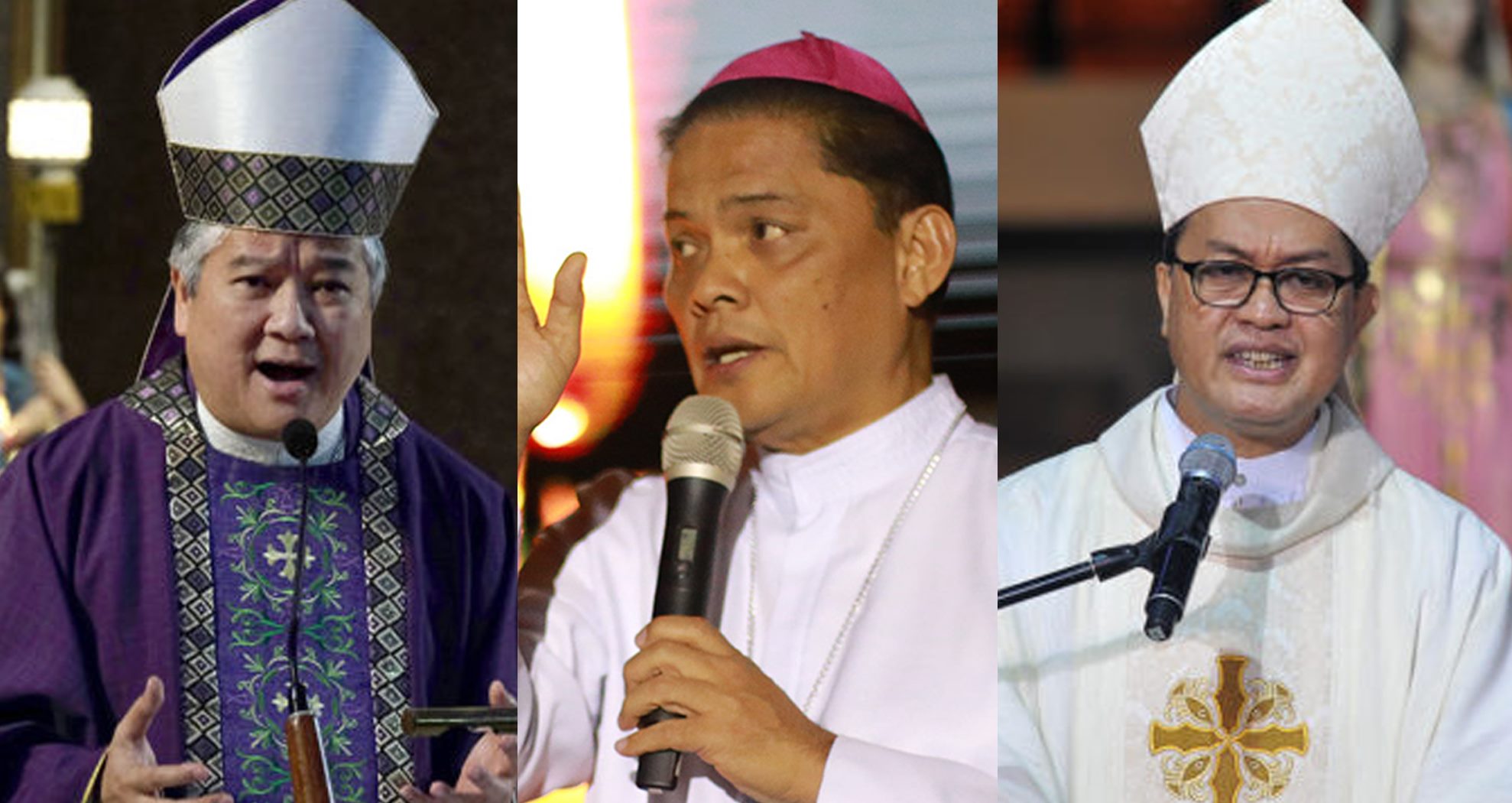 At least three names are being mentioned in church circles to replace the outgoing archbishop of Manila, Cardinal Luis Antonio “Chito” Tagle, who is set to occupy a top Vatican post.

Included on the list is a surprise front-runner, Archbishop Gilbert Garcera, the Bicolano cleric appointed by Pope Francis nearly three years ago to head the Archdiocese of Lipa in Batangas.

Also in the running are Bishop Pablo Virgilio David of Kalookan and Archbishop Socrates Villegas of Lingayen-Dagupan, two outspoken critics of the Duterte government’s bloody war on drugs.

There are many factors at play in the choice of the next occupant of the See of Manila, a position of influence in the Asian Church. Its profile was raised by one of its most famous modern prelates, Jaime Cardinal Sin, who was instrumental to the ouster of two Philippine presidents.

Cardinals from the ‘peripheries’

Pope Francis has long indicated a preference for pastors from the margins or “peripheries” of society – especially in the selection of new members of the College of Cardinals who will elect his successor. The next archbishop is a shoo-in for the red hat as the Archdiocese of Manila, the mother of all Filipino dioceses, is a cardinatial see along with Cebu, the birthplace of Christianity in the Philippines.

Francis has appointed numerous cardinals from the margins, particularly in places where Christians are a minority and subject to persecution.

Archbishop Orlando Quevedo, a major figure in interreligious dialogue in Mindanao, was among the first 19 cardinals created by Francis in 2014 or a year after he became pope.

Other examples of cardinals from the peripheries are Archbishop Jean Zerbo of Bamako, Mali, Bishop Louis-Marie Ling Mangkhanekhoun of Paksé, Laos, and Archbishop Charles Maung Bo of Yangon, Myanmar, who was the pope’s legate to the 51st International Eucharistic Congress successfully hosted by Cebu in 2016.

Tradition and precedent could also be significant factors. Candidates for archbishop of Manila have usually been heads of historically important metropolitan sees.

Gabriel Reyes was archbishop of Cebu when he was appointed to Manila in 1949. Cardinal Sin came from Jaro in Iloilo when he was moved to the capital in 1974. Sin’s successor, Cardinal Gaudencio Rosales, was plucked out by Pope John Paul II from Lipa to lead Manila in 2003.

Age is not historically a factor – Rosales took possession of Manila at the advanced age 71. Rufino Santos was one of the youngest to become archbishop at only 44 and was created the first Filipino cardinal at 51. Tagle, now 62, was 54 at the time of his appointment; he received the red hat at 55.

The above-mentioned factors work in favor of Garcera, who, church sources said, leads the pack of likely successors.

Garcera, 60, trained at Holy Rosary, the archdiocesan major seminary in Caceres, and became bishop of Daet in Camarines Norte in 2007 as the province struggled out of poverty.

The Lipa prelate could benefit from the strong backing of his predecessor, Cardinal Rosales, who continues to hold sway in Manila and Rome. Rosales chose to retire not in Manila but in Lipa, very close to Garcera.

During Rosales’ tenure in Manila, promotions went in the way of fellow “Josefinos” or alumni of the Jesuit-run San Jose Seminary located in the Ateneo, and this trend now coincides with Pope Francis’ turn toward his old order for candidates for important leadership posts.

Francis of late has named fellow Jesuits or Jesuit-trained clerics to Vatican offices, and Tagle, named prefect of the Congregation for the Evangelization of Peoples on Dec. 8, is a prime example. In November, Francis appointed the Spanish Jesuit Fr. Juan Antonio Guerrero Alves prefect of the Secretariat for the Economy, to replace the Australian cardinal George Pell. Earlier, in October, three Jesuits were elevated to the College of Cardinals.

Garcera has Jesuit training. In 1992, he obtained a master’s degree in religious studies from Ateneo de Manila, the Jesuit-run university. Garcera was one of only six Filipinos asked by Pope Francis to participate in the Synod of Bishops on the Family at the Vatican in October 2015, an indication of his high standing in Rome.

One does not necessarily have to be an archbishop to become a candidate for Manila. A bishop possesses the fullness of the priestly ministry, but ranks lower than an archbishop. A bishop heads a diocese, while an archbishop serves as pastor of a metropolitan area and oversees the surrounding dioceses, called suffragans.

Aside from being apostolic administrator in Lipa, the late Rufino Cardinal Santos was bishop of the military ordinariate before coming to Manila.

Tagle himself had been suffragan – the bishop of Imus in Cavite – to Rosales when the latter was metropolitan of Manila.

Bishop Pablo Virgilio David, formerly of San Fernando diocese in Pampanga, now heads the Diocese of Kalookan, a suffragan to Manila. A biblical expert who trained at Jerusalem’s famed Ecole Biblique et Archeologique, “Ambo” David has made a mark in the Church for his strident defense of human life amid the drug war – on the pulpit, the streets and against paid trolls on social media.

The appointment of either David or Lingayen-Dagupan Archbishop Socrates Villegas, who had been the subject of President Rodrigo Duterte’s anti-Catholic tirades, would send a strong statement of support from the highest levels of the Vatican.

In July, David and Villegas were accused of cyber-libel and inciting to sedition by an ex-convict who claimed he was used by opposition and church figures to produce a series of internet videos implicating the Dutertes in illegal drugs. Both clerics have strongly denied the charges, and have the backing for fellow bishops.

The 59-year-old Villegas, known as “Father Soc,” is the sentimental and perennial favorite, having been an aide to Cardinal Sin and a former president of the influential Catholic Bishops’ Conference of the Philippines (CBCP).

David, however, is the stronger contender.

Unlike Villegas who is a “Carlista,” or who went to San Carlos Seminary of the Archdiocese of Manila, David is a Josefino.

David, 60, also spent college at the Ateneo, and obtained his master’s in divinity at the Loyola School of Theology, which has produced many bishops. He has a licentiate and a doctorate from Louvain in Belgium, a center of modernist theology in Europe.

At the CBCP, he serves as vice president, next in line to the presidency when the incumbent, Romulo Valles, the archbishop of Duterte’s home city of Davao, ends his term in 2021.

Pope Francis still needs to name bishops to at least four vacant sees: the Diocese of Alaminos in Pangasinan and the apostolic vicariates of Jolo in Sulu, Taytay in Palawan and San Jose in Mindoro.

The nunciature is also vacant, as the apostolic nuncio, Archbishop Gabriele Giordano Caccia, has been named Vatican envoy to the United Nations in New York, replacing a Filipino Vatican diplomat, Msgr. Bernardito Auza, now the pope’s representative in Madrid.