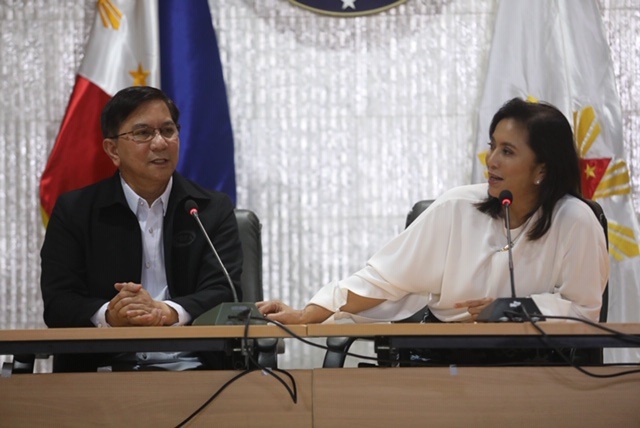 Robredo sought to set the tone for the drug war in her first meeting on Friday with the anti-drug committee she now co-chairs with Aaron Aquino, chief of the Philippine Drug Enforcement Agency.

“I am all for a strong national policy against illegal drugs, and I am all for a vigorous anti-drug campaign…having said that, I also feel that we should do things right. Everything that we’re doing should be within the bounds of the rule of law,” she said in her statement to members of the Inter-Agency Committee on Anti-Illegal Drugs or ICAD at her office in Quezon City.

Robredo said she was “all for evidence-based strategy and approach” and noted that President Rodrigo Duterte himself had expressed frustration that the number of drug dependents had risen to 7 to 8 million three years after the drug war began.

“That number is staggering. And iyong sa akin, ang gusto kong maintindihan din ngayon, saan tayo nagkukulang? Kasi a lot of the agencies have been pouring out tremendous effort and resources already for this campaign, and yet ganoon pa din kataas iyong numero,” she said.

Robredo on Wednesday accepted the president’s dare for her to take over the drug war following her criticism of the government drive, which has taken the lives of some 6,000 people, as a “failure.”

“With the Vice President at the helm of the anti-narcotics campaign, President Duterte expects that the former would see the realities on the ground, particularly with respect to the government’s position against extrajudicial or state-sponsored killings, and understand that deaths occur due to the violent reactions on the part of agents of the illegal drug trade against the strict enforcement of the law,” he said. (Felipe F. Salvosa II, PressONE.ph)