Hydroelectric plant to rise in Benguet 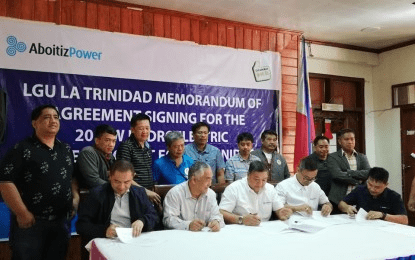 A 20-megawatt hydroelectric power plant will be operational by the middle of 2022 to deliver an additional 61 million kilowatt-hours per year to the Luzon grid.

Called Sablan 1, the power plant itself will be located in Sablan while will the weir or low head dam will be found in La Trinidad in Benguet.

This was bared by Cris Faelnar, senior vice president of Aboitiz Power-Hedcor Inc. who added that this facility will also boost the company’s electric generation capacity coming from La Trinidad, Benguet to 43 megawatts from the current total of 23.5.

This current capacity is being generated by La Trinidad 1 power plant with an output of 19 megawatts and Bineng 3’s 4.5 megawatt output.

The signing of the memorandum of agreement (MOA) was led by La Trinidad Mayor Romeo Salda, who pointed out that the hydroelectric plant is the biggest project in the municipality for this year.

The mayor said the project will bring potentially higher income to the town primarily due to the local jobs that will be generated when the power plant’s construction and operation start.

The Hydroelectric Development Corporation Inc. (Hedcor) owns and operates some 22 hydropower plants nationwide, 13 of which are found in Luzon with 11 of these plants are located in Benguet.  (Jojo Mangahis)​