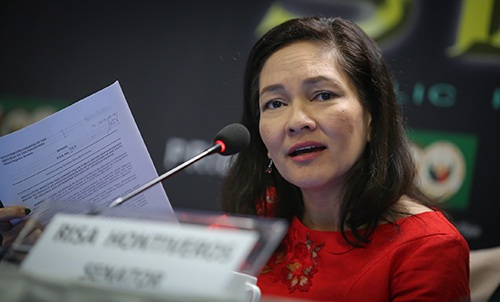 “Kailangan magbuo ng loob si Presidente to speak clearly and unequivocally para marinig siya at maintindihan ng Tsina. He cannot say that a compromise has not yet been reached, for example on Ayungin Shoal,” Hontiveros said in an interview on ANC.

Earlier, Marcos explained that the Philippines has used the communication mechanism he proposed in Beijing amid reports that the Chinese coast guard dispelled Filipino fishermen around Ayungin Shoal.

Marcos said he is hopeful that the Chinese government would notify Chinese President Xi Jinping about this event.

The Philippine president also added that during his state visit to Beijing, he and Xi have already agreed to “find a compromise and find a solution that will be beneficial so that fishermen might be able to fish again in their natural fishing grounds.”

Hontiveros, on the other hand, said that there should be no compromises when talking about national sovereignty, noting the Philippines’ The Hague victory in 2016.