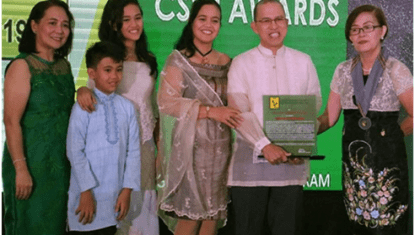 Due to his breakthrough research on rice breeding, Dr. Glenn B. Gregorio has earned the title Honorary Fellow from the Crop Science Society of the Philippines (CSSP).

Gregorio steered the development of at least 20 rice varieties with tolerance to abiotic stresses while he was a senior plant breeder at the International Rice Research Institute (IRRI).

Gregorio established fast screening systems that produced the first batches of salt-tolerant varieties, which has been proven to sufficiently improve levels of total body iron in women’s blood.

This is a dramatic discovery not only in the Philippines but even in Asia and Africa, which stemmed from his studies on rice genetics and molecular mapping for salinity tolerance in rice.

Gregorio is a scientist, research manager, teacher and also the director of the Southeast Asian Regional Center for Graduate Study and Research in Agriculture (SEARCA).

In his acceptance speech, Gregorio dared young crop science professionals to “continue to explore and enjoy, to try and to be ready, to fail and learn from it.”

“We tried it; succeed or fail, we always learn. Explore, dare, be different and take risks for the sake of science. But, at the same time, be patient. Perseverance is the key,” he said.

According to its Facebook page, CSSP, the award giver, “is organized to promote human welfare through the discovery and dissemination of knowledge concerning the nature, utilization, improvement, and interrelationships of plants and their environment, and people.” (Jojo Mangahis)