A Facebook post wrongly claims the famed Tokyo Skytree was lighted pink in support of Vice President Leni Robredo’s candidacy for the 2022 presidential election. It has since been deleted but the screenshot of the post can be seen below. 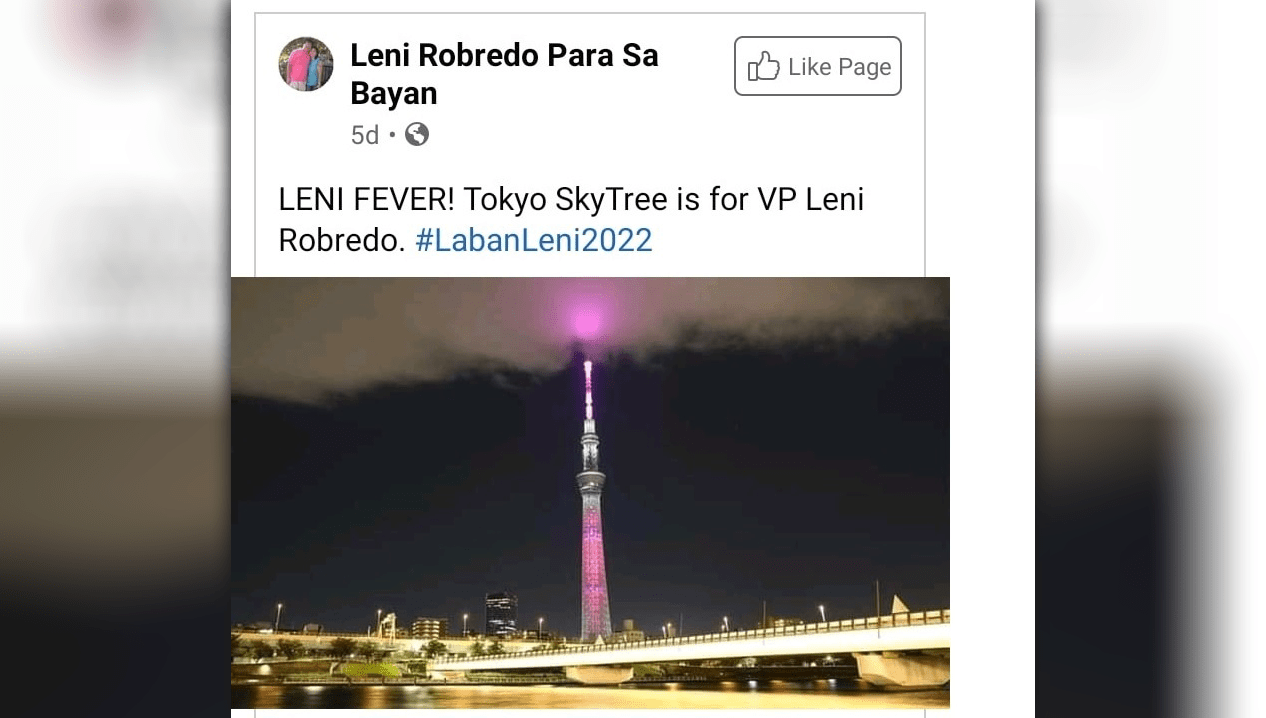 The Facebook post falsely claiming that the Tokyo Skytree was lighted pink after Vice President Leni Robredo filed her certificate of candidacy on Oct. 7.

A Facebook page supporting the presidential candidacy of Vice President Maria Leonor “Leni” Robredo posted on Oct. 7 a photo of the famed Tokyo Skytree lighted in pink. The post wrongly claimed that the broadcasting and observation tower in Sumida, Tokyo was lighted in support of Robredo who announced her intent to run for president of the Philippines in the May 2022 national elections as an independent.  She filed her certificate of candidacy on the same day. Pink is the new political color of Robredo instead of yellow used by the Liberal Party where she is still the party chair.

A reverse image search of the photo used to make the claim reveals the photo of was taken on Oct. 24, 2020 to symbolize one of the Sustainable Development Goals (SDG) of the United Nations. Tobu Tower Skytree Co., Ltd, the operator of the Skytree, said in a press release that  the tower was lighted using 17 different colors to symbolize each of the 17 SDGs.  The lighting was meant to “boost momentum toward achieving SDGs and to commemorate the 75th anniversary of the UN”.  The lighting started on Oct. 24, 2020, the United Nations Day, and continued until Oct. 28, 2020.

A video of the changing of the light colors can be viewed here through the official Twitter account of the Tokyo UN Information Center.

The October 2020 photo of the tower lighted in pink was used to mislead the public that the Japanese company operating the tower was supporting the candidacy of a Filipino politician on the day that Robredo filed her certificate of candidacy for the presidency. – Rommel F. Lopez