FACT-CHECK: The UN did not declare dictator Ferdinand Marcos the “best president” in the 1970s

The United Nations does not get to choose the “best president” in the world. 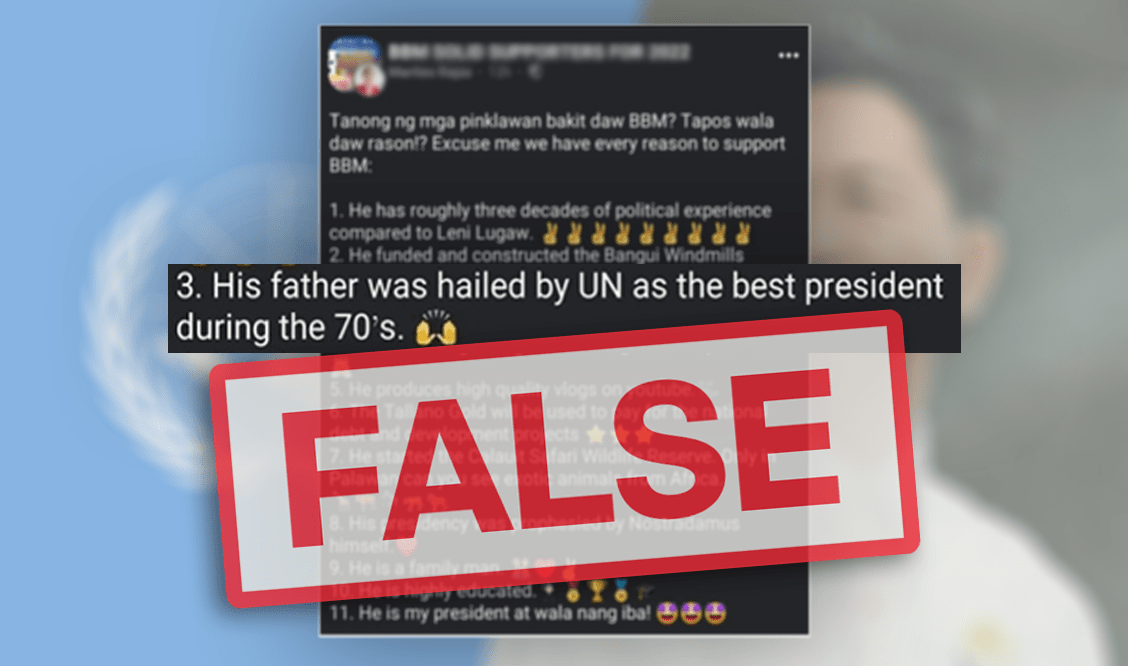 A Facebook post being circulated among supporters of Ferdinand “Bongbong” Marcos Jr. makes an outlandishly erroneous claim about the presidential hopeful’s late father — that the dictator and plunderer was named the world’s “best president” by the United Nations in the 1970s.

Our fact-check has found that the UN has never bestowed such a recognition, contrary to the now deleted post by a Facebook user which was shared in a pro-Bongbong Marcos group.

The post, which enumerated 11 reasons to vote for the late dictator’s son, contained many falsehoods, such as the previously debunked Tallano gold hoard, but the claim that Ferdinand Marcos Sr. was the best president was the most out of this world. 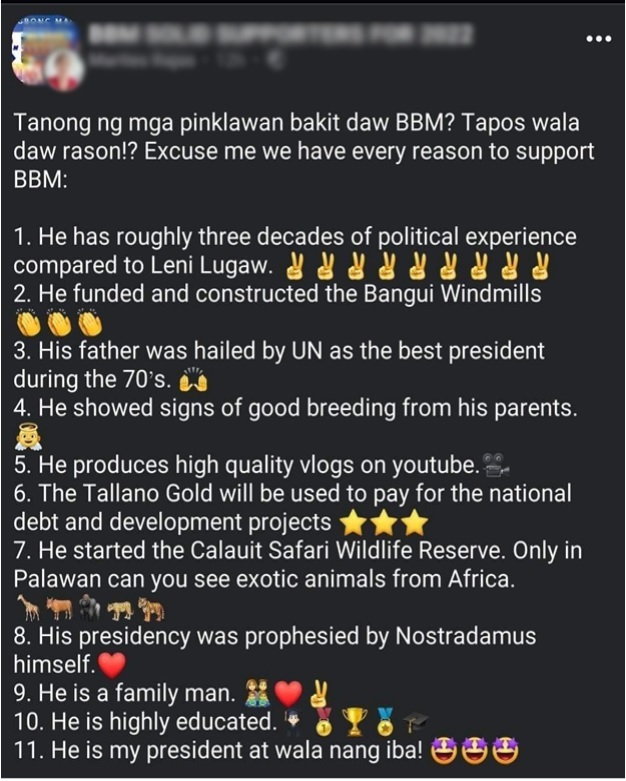 A screenshot of the now-deleted post that makes outlandishly erroneous claim about the late dictator and plunderer Ferdinand Marcos, Sr., one of which claims he was named the world’s “best president” by the United Nations in the 1970s.

The UN, founded Oct. 24, 1945 in the aftermath of World War 2 and made up of 193 member-states, hands out just three recognitions annually: the United Nations Public Service Awards, the UN Secretary General Awards, and the International Union of Architects 2030 Award.

The UN calls its Public Service Award “the most prestigious international recognition of excellence in public service.” It recognizes public service institutions for their creative achievements and contributions “that lead to a more effective and responsive public administration in countries worldwide.” The first awards were handed out in 2003.  Only two institutions from the Philippines were recognized. The first was the local government of Naga City in 2003. The late Jesse Robredo, husband of Vice President Maria Leonor Robredo, was mayor at that time.  The second one was in 2015 for the City of Mandaluyong’s – Project Teach (Project Therapy, Education, Assimilation of Children with Handicap).

The Secretary General Awards recognizes UN Secretariat personnel and teams for their significant performance and for going “beyond the call of duty in the discharge of their duties [to] initiate and implement projects with great impact and innovative potential.” Since this is limited to UN Secretariat employees, no head of state or government receives this award.

Only architects are eligible to receive the award, which recognizes “built projects which demonstrate design quality and have made significant contributions towards achievement of the Sustainable Development Goals (SDGs) in six categories.”  The award’s first cycle (2021 – 2022) has started accepting entries.

This post being widely shared in social media by accounts loyal to the late dictator and plunderer has no factual basis and is therefore FALSE. – Rommel F. Lopez