The quote comes from the late Singaporean premier’s best-selling book, “From Third World to First: The Singapore Story 1965-2000.” 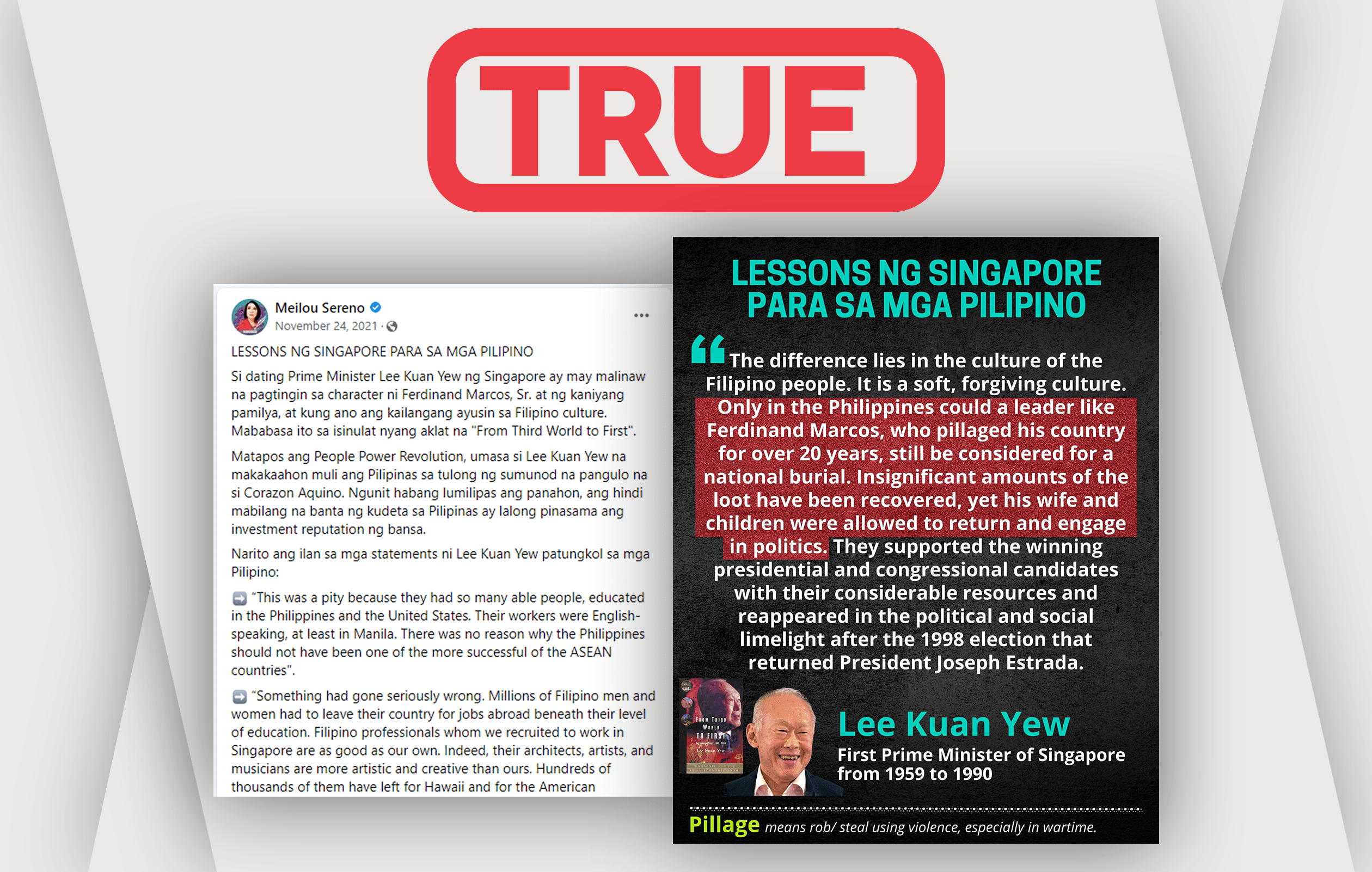 CLAIM: Lee Kuan Yew, the late prime minister of Singapore, once said that the late Filipino dictator Ferdinand Marcos “pillaged” the country during his two-decade rule.

In a Facebook post that went viral, former chief justice Maria Lourdes Sereno correctly quoted the memoirs of the late prime minister Lee Kwan Yew of Singapore, who said the late dictator Ferdinand Marcos had pillaged the Philippines during his 20-year rule.

The post, titled “Lessons ng Singapore para sa mga Pilipino,” was accompanied by an image containing the following quote from Lee: “The difference lies in the culture of the Filipino people. It is a soft, forgiving culture. Only in the Philippines could a leader like Ferdinand Marcos, who pillaged his country for over 20 years, still be considered for a national burial. Insignificant amounts of the loot have been recovered, yet his wife and children were allowed to return and engage in politics. They supported the winning presidential and congressional candidates with their considerable resources and reappeared in the political and social limelight after the 1998 election that returned President Joseph Estrada.”

The quote above, and others about Marcos, the Philippines, and Filipinos, appear on the late Singaporean premier’s best-selling book, “From Third World to First: The Singapore Story 1965-2000.”

The portion quoted by the image on Sereno’s post is in Chapter 18 (“Budding Ties with Thailand, the Philippines and Brunei”), Page 305, where Lee discusses why the Philippines was not as successful despite having professionals and artists as good, if not better, than Singapore’s.

Sereno’s Nov. 24, 2021 post has been shared some 5,000 times and has drawn about 1,100 comments. The ex-magistrate has been using her social media page to do her own fact-checks and share information.

Sereno’s post contained other quotes from Lee. At the end, she admonished her followers to study history assiduously.