*Editor’s Note: This story was revised for clarity.

The lawmaker’s post could lead to the impression that the Tiwi geothermal plant and other state power assets were privatized for no reason. 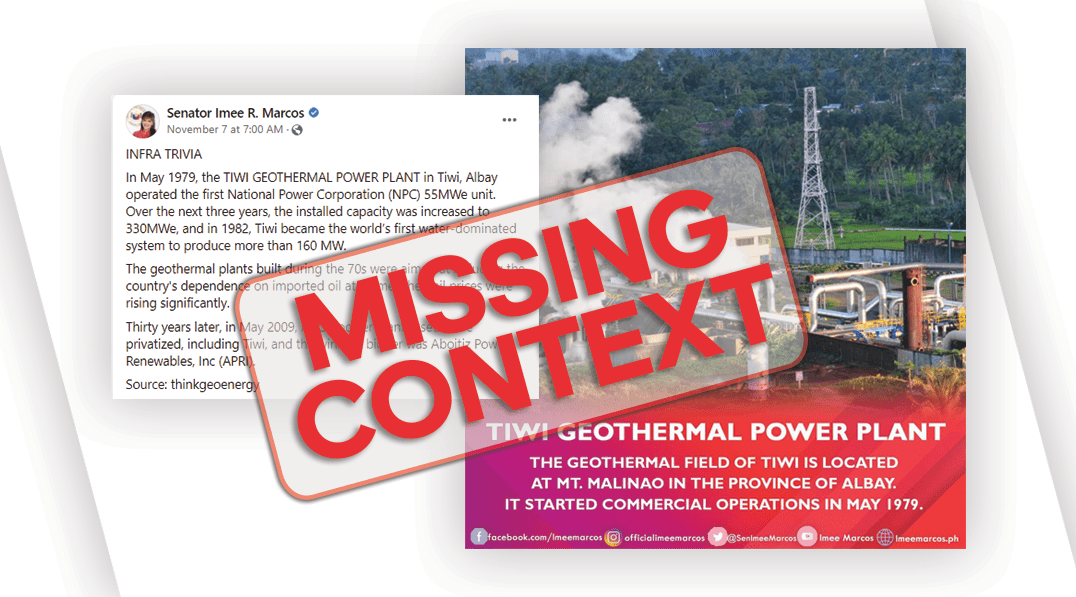 Claim: Power plant assets of the state-owned National Power Corp., including the Tiwi Geothermal Power Plant built in the 1970s to help the Philippines achieve energy independence, were sold in May 2009 to the Aboitiz group.

Sen. Imee Marcos left out key contexts — burgeoning power sector debts and the need for market reforms — when she posted about the privatization of the Tiwi Geothermal Power Plant in Facebook on Nov. 7.

After sharing information to her followers about the operation of the plant in Tiwi, Albay in May 1979 and capacity increase in 1982, Marcos fast-forwarded 27 years to May 2009 when the geothermal plant built during the regime of her father, the late dictator Ferdinand Marcos, was sold to Aboitiz Power Renewables Inc.

In her “infra trivia” on her verified account, which has been shared more than 3,200 times and reacted to by nearly 16,000 users, Senator Marcos wrote:

“In May 1979, the TIWI GEOTHERMAL POWER PLANT in Tiwi, Albay operated the first National Power Corporation (NPC) 55MWe unit. Over the next three years, the installed capacity was increased to 330MWe, and in 1982, Tiwi became the world’s first water-dominated system to produce more than 160 MW.

The geothermal plants built during the 70s were aimed at reducing the country’s dependence on imported oil at a time when oil prices were rising significantly.

Thirty years later, in May 2009, NPC’s power plant assets were privatized, including Tiwi, and the winning bidder was Aboitiz Power Renewables, Inc (APRI).

The lawmaker’s post could lead to the impression that the Tiwi geothermal plant and other state power assets were privatized for no reason.

In 2001, Congress passed Republic Act 9136 or the Electric Power Industry Reform Act (Epira) to address the burgeoning debt of the National Power Corp. (Napocor), incurred as a result of the debilitating power crisis of the 1990s.

Napocor’s debts had reached P831 billion ($16.6 billion) at that time, according to the Power Sector Assets and Liabilities Management Corp. or PSALM, the corporation created under Epira to take over and dispose of Napocor’s financial obligations. Liabilities ballooned further to P1.2 trillion in 2003 because of the peso devaluation and new debts after the government failed to repay maturing obligations.

As a result of the sale and management of Napocor assets, debts were reduced to P367.9 billion as of June 2021, according to PSALM.

The Tiwi-Makban Geothermal Power Plants, which had a rated capacity of 747.5 megawatts, were auctioned on July 30, 2008 and sold to AP Renewables Inc. of the Aboitiz group on May 25, 2009 for $447 million. Aboitiz beat the only other bidder, First Luzon Geothermal Energy Corp. of the Lopez-led Energy Development Corp.

Including the proceeds of the Tiwi-Makban sale, PSALM has raised P907.8 billion from privatization.

The soundness of the power privatization policy under Epira continues to be debated by politicians, including Marcos herself.

In a 2018 policy note published by the state-run Philippine Institute for Development Studies, researchers Arlan Brucal and Jenica Ancheta described Epira as “one of the landmark pro-market reforms implemented to achieve reliable and competitively priced electricity in the Philippines. Due to its perceived ineffectiveness, however, the law has been subjected to a number of criticisms with some calling for its review, if not an outright repeal.”

They concluded however that Epira “appears to be a well-thought power sector reform design, having followed most of the features of the kind of reform structuring found to be successful historically.”