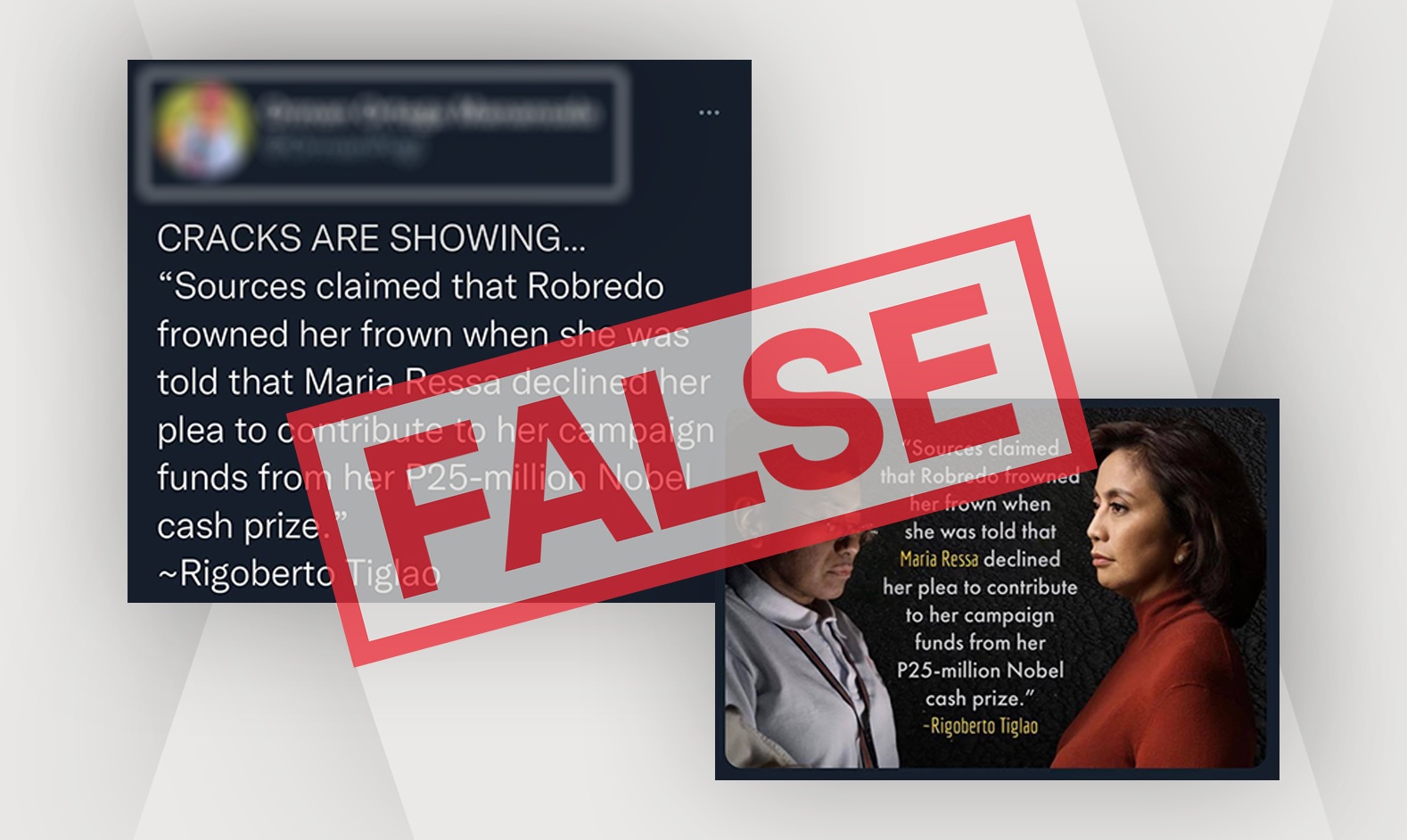 Tiglao claimed, again without solid basis or evidence except the say-so of anonymous sources, that Robredo wanted Ressa to get money out of the P25 million she had won as one of the two recipients of the 2021 Nobel Peace Prize.

“Sources claimed that Robredo frowned her frown when she was told that Maria Ressa declined her plea to contribute to her campaign funds from her P25-million Nobel cash prize,” Tiglao wrote.

Tiglao’s wrong claim was made into a quote card by a self-proclaimed blogger, Orman Ortega Manansala, on Facebook and Twitter. “Cracks are showing” in the Robredo camp, he wrote.

Replying to the claim on Twitter, Ressa said: “Hahahaha not satisfied with disinformation, they outrightly lie … I don’t read him.”

Poor old man, only thing left is to lie? Sad that one. You can track back to the last time we replied to a lie (takes up too much time otherwise) https://t.co/fK0KQ3w2Yn

Ressa might have actually won more than P25 million if the prize of 10 million Swedish krona, equivalent to $1.14 million or P57 million when she received the award in December, was split into two. The other Nobel winner was Russian journalist Dmitry Muratov.

Robredo has been nothing but congratulatory toward Ressa.

Congratulations to @mariaressa for being awarded the 2021 Nobel Peace Prize! This is a recognition and affirmation of your tireless efforts to hold the line for truth and accountability. I applaud your courage. Mabuhay ka! pic.twitter.com/o5RQXoXdG6

“Congratulations to @mariaressa for being awarded the 2021 Nobel Peace Prize! This is a recognition and affirmation of your tireless efforts to hold the line for truth and accountability. I applaud your courage. Mabuhay ka!” the vice president said in an Oct. 8, 2021 tweet.

One day later, in her “BISErbisyong Leni” radio program, Robredo lauded Ressa for her Nobel win.

(Maria Ressa is so deserving of the award. For me, we should thank her. At the same time I hope we understand the importance of this award, that Maria Ressa is fighting for press freedom, and that freedom of expression is safeguarded.)

We are constrained to rate Tiglao’s claim as false, in the absence of solid basis to prove it otherwise. John Ezekiel J.Hirro