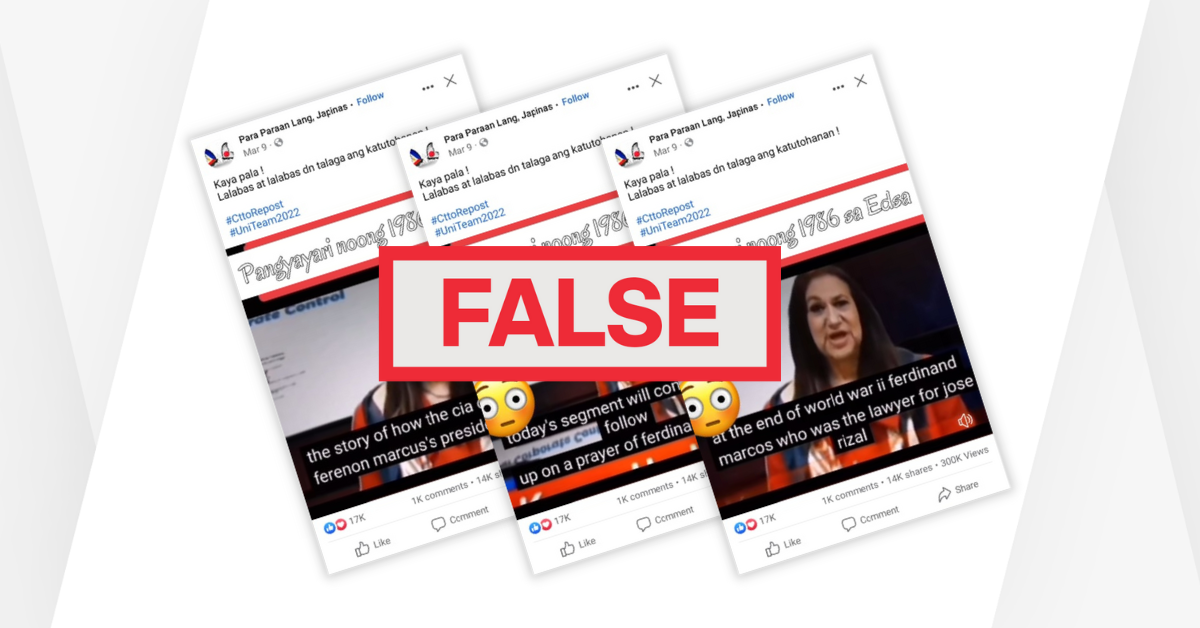 Claim: The EDSA People Power Revolution of 1986 was engineered the US Central Intelligence Agency and the Vatican.

In the video we had debunked previously, the discredited former World Bank employee Karen Hudes makes another outlandish claim: that the EDSA People Power Revolution of 1986 was engineered the US Central Intelligence Agency and the Vatican.

Hudes quotes a non-historian, Erick San Juan, in saying that the 1986 uprising was a conspiracy by global powers against Marcos. “EDSA is named for Epifanio de los Santos Avenue, the street of the CIA- and Vatican-engineered demonstrations against Ferdinand Marcos,” she claims.

Sin headed the Archdiocese of Manila, an influential post, but his political positions did not reflect those of the Vatican, which is the governance structure of the Catholic Church in Rome. In fact, Sin’s actions were said to have caused discomfort in the Vatican, and he was said to have been called to Rome explain himself. An obituary for Sin cited Vatican opposition to his call on the people to march to EDSA.

Did the CIA engineer EDSA ‘86? The CIA is no stranger of course to regime change. But Hudes’ authority, San Juan, makes uncorroborated claims, which makes Hudes’ video testimony incredible.

A declassified CIA document did show that the US government had analyzed the impending downfall of Marcos and prepared for various scenarios, including influencing the choice of his successor.

The explanation for EDSA ‘86 is the simplest one: Filipinos rose up in anger at the electoral fraud that occurred during the February 1986 snap elections, and were fed up with the authoritarian and kleptocratic rule of Ferdinand Marcos.

In the absence of any solid evidence that the People Power revolt was organized at the behest of an international conspiracy, credit for the overthrow of Marcos belongs to the Filipinos who stood up against a dictatorial and murderous regime.