An old social media post claiming that the late Interior secretary Jesse Robredo was already dead before his fatal plane crash in 2012 has resurfaced and is making the rounds online.  This post had already been debunked. 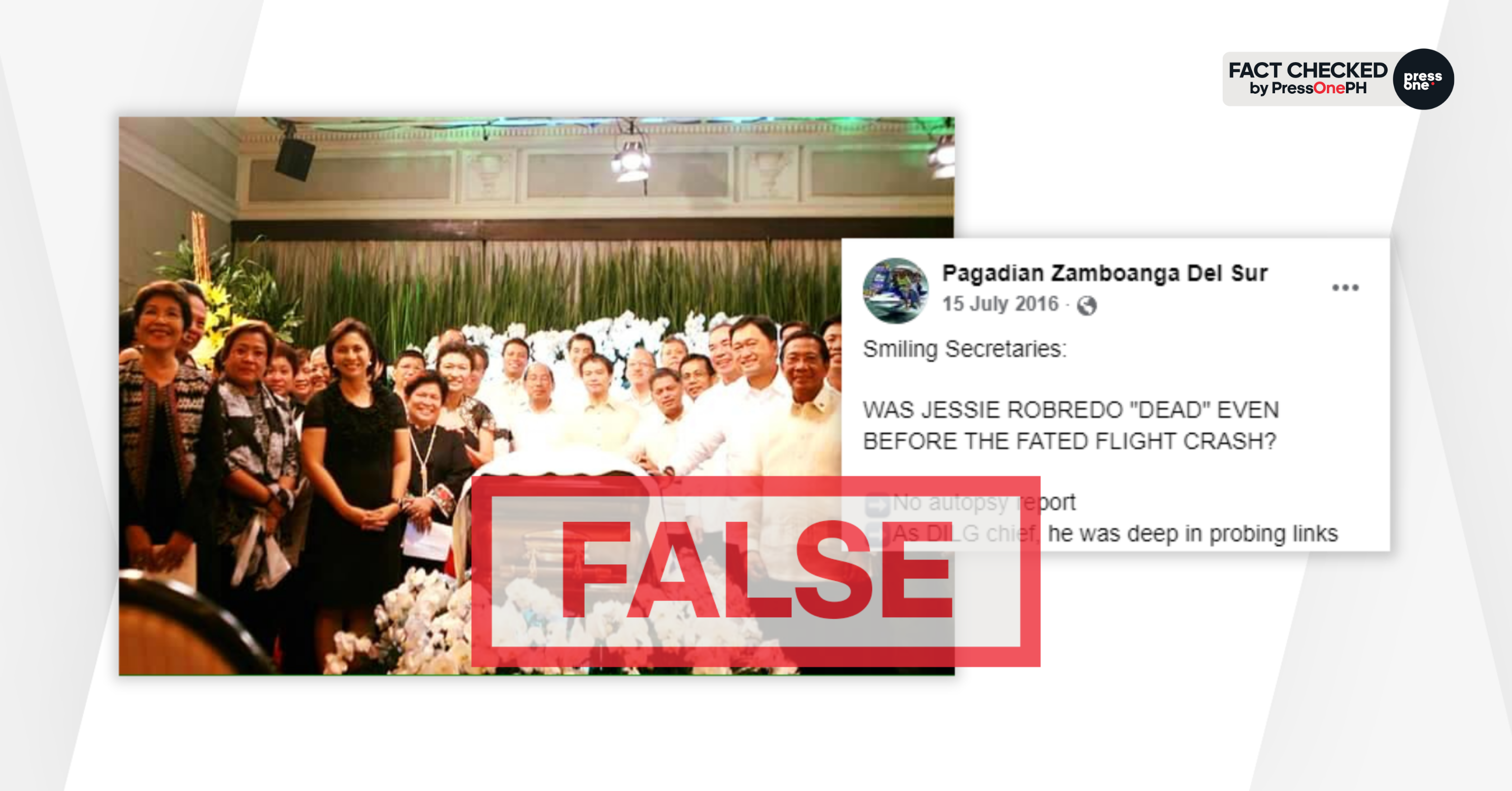 An old social media post claiming that the late Interior secretary Jesse Robredo was already dead before his fatal plane crash in 2012 has resurfaced and is making the rounds online.  This post had already been debunked.

CLAIM: The late Department of the Interior and Local Government (DILG) Secretary Jesse Robredo, the husband of Vice-President Leni Robredo, was already “dead” before his ill-fated plane crashed off the coast of Masbate in 2012.

An old social media post by Facebook page Pagadian Zamboanga Del Sur in 2016, has resurfaced claiming that former Interior Secretary Jesse Robredo was “dead” before his plane crashed in 2012 off the shores of Masbate.

The post included a picture originally taken by the Malacañang Photo bureau and used in an article by Rappler on August 27, 2012.

The picture showed Mr. Robredo’s coffin, his wife Vice President and presidential aspirant Leni Robredo and others members of the cabinet of President Noynoy Aquino.

There are other fact-check-worthy claims on the post, but most have been debunked and are considered conspiracy theories over the death of Mr. Robredo and the administration of the late President Noynoy Aquino.

There is no factual basis to support the false claim that the DILG secretary was already dead before his Piper RP-C 4431 plane crashed.  Along with Robredo, the plane’s two pilots were also killed. Only the close-in-aid of Robredo, Police Chief Insp. June Paolo Abrazado survived the crash.

As reported by Inquirer.net, hours before his death, Robredo arrived in Cebu to attend the summit of the Community Investigation Support (CIS) of the Criminal Investigation and Detection Group at the Cebu International Convention Center in Mandaue City.

He also delivered a speech on behalf of Aquino to hundreds of CIS civilian anti-crime volunteers before speeding out of the venue to go to his next appointment. However, local reporters managed to convince him for a quick walk-and-talk ambush interview as posted on Facebook by Cebu-based reporter Fe Marie Dumaboc on August 18, 2012.

Manilla Bulletin also reported Rebredo’s statements to a local reporter that he was “in a hurry” to go home to Naga City for one of her daughter’s swimming competition’s awarding ceremonies.

One of Mr. Robredo’s last stop was to lead the groundbreaking of the Philippine National Police Regional Training Center 7 at Consolacion, Cebu, before boarding his ill-fated plane. The camp was later named after him based on a report by Cebu-based daily Sunstar.

The Inquirer also published an article where Abrazado recounted the moment when he and Robredo noticed that the plane was experiencing engine trouble.  To make light of the situation, he told a joke that made the DILG secretary laugh.

“While we were still up in the air, the display panel that also displayed a directional map kept on flashing: ‘aviation expires 18 or November 28 2010.’ I can see from the panel a distance notification that said 20 to 26 miles. I don’t know what the expiration message meant. I wanted to inform the secretary about it but I did not want him to worry. I just made the secretary laugh by saying that there were many cases when a plane was flying with only one engine functioning,” he was quoted by the Inquirer as saying proving that Robredo was alive moments before the plane crashed.

In Nov. 2012, Aquino said in a press briefing that the investigation of the Civil Aviation Authority of the Philippines (CAAP) pointed to pilot error and other safety lapses as the causes of the fatal plane crash.

With hundreds of eyewitnesses and numerous reports, Mr. Robredo was indeed alive before his plane crashed, debunking the erroneous social media post, which is now being shared by supporters of a certain presidential aspirant, a rival of her widow and current vice president, Leni. – Ryan Christopher J. Sorote