Pro-Marcos partisans have used social media to attack Robredo, and with Imee Marcos starring in the “Lenlen” series, Vic Rodriguez, a lawyer, cannot claim the UniTeam to be a paragon of a clean campaign. 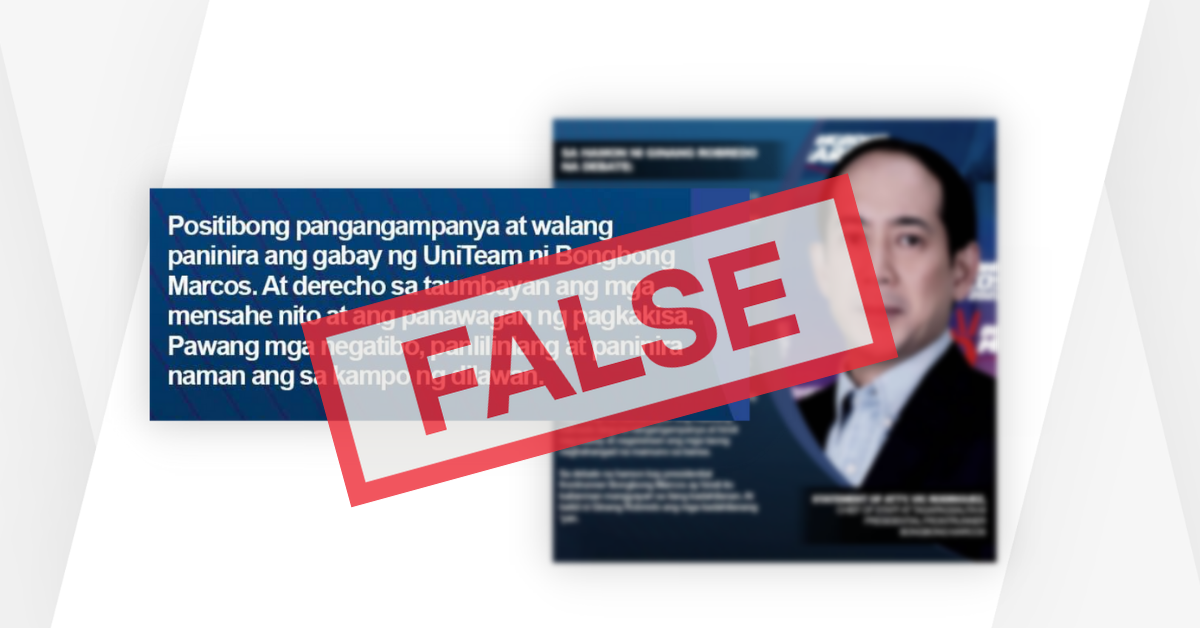 CLAIM: The “UniTeam” presidential campaign was guided by positive campaigning and did not resort to mudslinging.

Marcos spokesman Vic Rodriguez falsely claimed on April 29 that the “UniTeam” presidential campaign was guided by positive campaigning and did not resort to mudslinging.

(Positive campaigning and no mudslinging is the guide of the UniTeam of Bongbong Marcos. And its message and call for unity goes straight to the people. The yellow camp is engaged only in negativity, deception, and detraction.)

This is false, as there are various examples of negative campaigning by the Marcos camp.

We’ll cite just one: the “Lenlen” series that featured no less than Marcos’s sister, Sen. Imee Marcos. The video series three a lot of shade on Robredo, with Imee and two other characters taking turns lashing out at “Lenlen,” who turns out to be puppet.

A false narrative that the Marcos camp has been advancing is that Robredo is a “puppet” of the “Yellows” or “Dilawan,” particularly the Liberal Party of the late president Benigno Aquino III. The “puppet” is deemed a “loser” who brews bitter coffee.

The characters in the video also viciously attack the puppet’s womanhood. A Social media influencer whose money problems were recently revealed could be heard chanting, “Ang fake fake mo, nangangamoy, nangangamoy (You’re so fake fake, it’s so smelly).” “Fake fake” is made to sound the same as the Filipino word for a woman’s genitals.

Pro-Marcos partisans have used social media to attack Robredo, and with Imee Marcos starring in the “Lenlen” series, Rodriguez, a lawyer, cannot claim the UniTeam to be a paragon of a clean campaign.