What former senator Ferdinand “Bongbong” Marcos Jr. said was that people in sensitive government positions should have clean track records 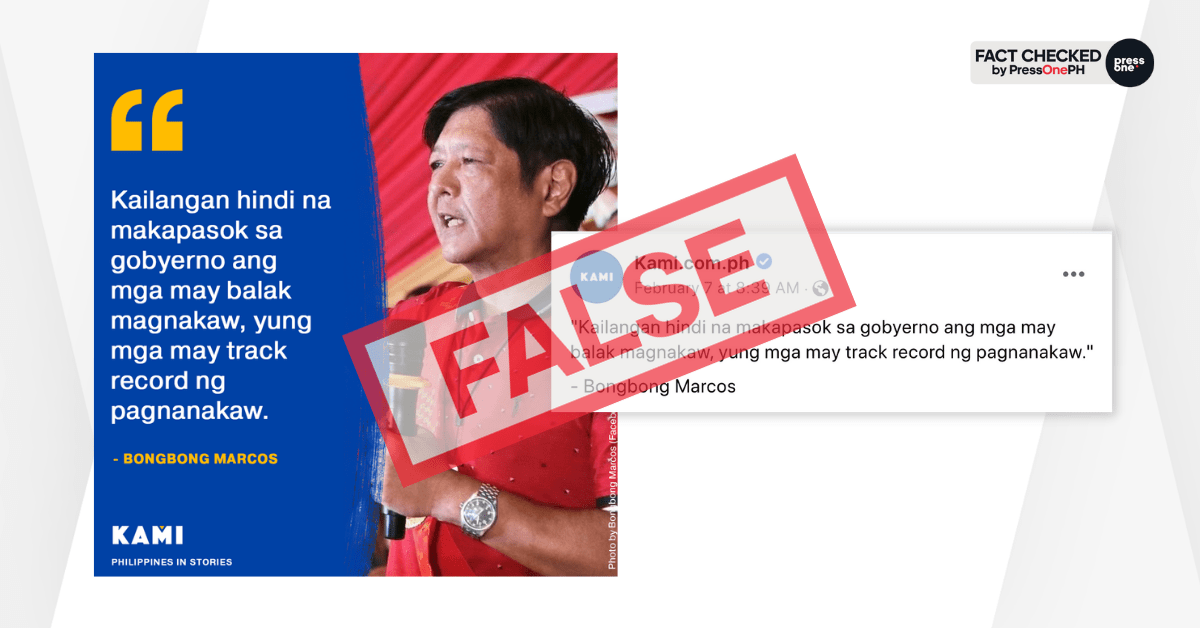 CLAIM: Former senator Ferdinand “Bongbong” Marcos Jr. said people with a track record in stealing should not be allowed to work for the government

“Kailangan hindi na makapasok sa gobyerno ang mga may balak magnakaw, yung mga may track record ng pagnanakaw (Those who want to steal and have intentions to steal should not be allowed to enter the government),” Marcos was incorrectly quoted as saying.

On its “About Us” page, Kami.com.ph states that part of its “manifesto” was to “[a]lways refer to the initial source of information and make a clear reference to it, whenever possible.”

But its Facebook post did not make an attribution as to where and when Marcos said the claim, and the photo only included the same quote as the caption.

The Marcoses have a history of ill-gotten wealth, as shown here and here, and the supposed quote is being used to make it appear that Marcos Jr. is disqualifying himself from government office. Indeed, corrupt people should not work for the government. But Marcos did not say those exact words.

Attached under Capati’s tweet was a photo of Marcos’s Feb. 5 guesting in “Ikaw Na Ba? The Presidential Interviews on DZBB,” where the news chargen displayed, “Ex-Sen. Marcos: Kailangan hindi na makapasok ang mga may balak na magnakaw” (Those with intentions to steal should not be allowed to enter government).

This quote and chargen, however, merged two different statements made by Marcos during the interview, resulting in a statement with a different meaning.

During the interview, Marcos was asked the question, “Paano niyo po su-solusyonan ang problema sa korapsyon? At kaugnay nyan, nais din po naming malaman ang inyong posisyon tungkol sa pagsasapubliko ng SALN (Statement of Assets, Liabilities and Net Worth) ng mga official ng pamahalaan (How will you solve the country’s corruption problem? And in relation to that, we also want to know your position on requiring government officials to have their SALNs available to the public).”

Marcos responded by saying that red tape breeds corruption, and government and civil service processes should be expedited to prevent officials from pocketing money.

(These processes should be expedited so that those with intentions to steal would not be able to enter.)

Thus, the part of Marcos’s quote pertaining to barring the entry of people with a track record of stealing pertains to reducing red tape in government transactions.

What Marcos said was that people in sensitive government positions should have clean track records.

(Before appointing someone to a position that handles huge amounts of money, it should be made sure that that person has a clean track record and has no history of wrongdoing or suspected or proven to have committed wrongdoing.)