A quote card being circulated by pro-Marcos Facebook pages blew Kris Aquino’s quote from 2017 out of context. 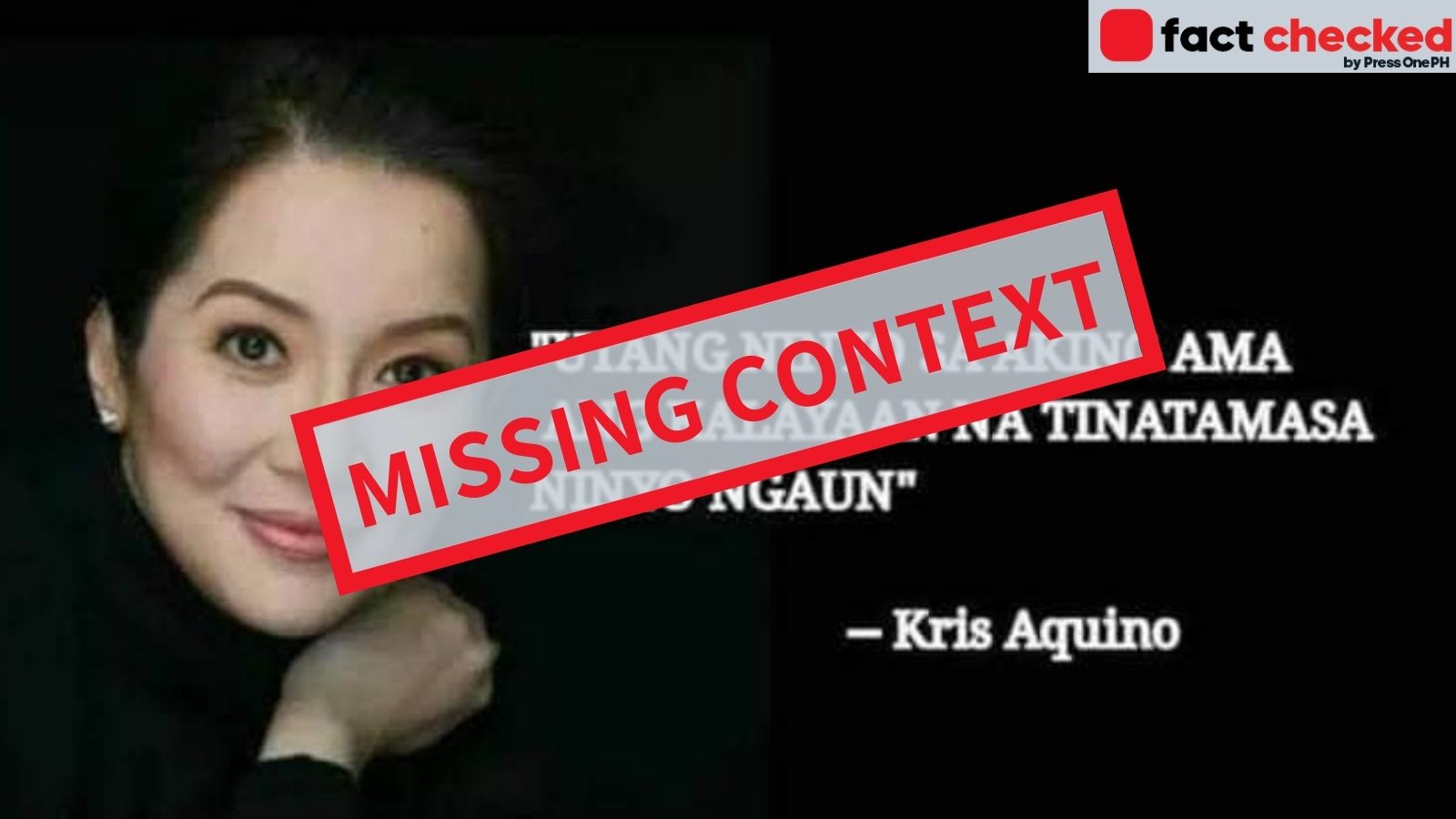 (You owe to my father the freedom you are enjoying today.)

The quote can be dated back to Nov. 27, 2017, when in an Instagram post Kris remembered her late father in what would have been his 85th birthday.

In the latter part of the post’s caption, Kris wrote: “Try as you may, #fakenews folks- you cannot rewrite history. And the truth is you do owe this man the fact that you have FREEDOM OF SPEECH, FREEDOM OF EXPRESSION & FREEDOM OF THE PRESS TODAY- because he had the balls to actually DIE for his country- in super clear language, HINDI SYA INURUNGAN NG BAYAG KAHIT ALAM NYA NUNG PABABA SYA NG EROPLANO NA BABARILIN NA SYA SA TARMAC ng AIRPORT (italics ours, capitalizations Kris’s).

In her caption, Kris merely inferred that her father’s death on Aug. 21, 1983 was among the events that stirred Filipinos to protests that eventually toppled the dictator Ferdinand Marcos Sr., who was known for curtailing the freedoms of speech, expression, and the press with his authoritarian rule.

The quote card posted by the pro-Marcos pages overstated Kris’s quote by saying the Filipino nation became free thanks to Ninoy.

The Philippines gained independence from foreign rule on July 4, 1946—when Ninoy was just 13 years old—when the US formally recognized the independence of the Philippine Republic and withdrew its sovereignty over the country.

In 1962, President Diosdado Macapagal issued Proclamation No. 28, s. 1962, which moved the date of Philippine independence from July 4 to June 12—the date independence from Spain was proclaimed in Emilio Aguinaldo’s home in Kawit, Cavite.

Macapagal said, “the establishment of the Philippine Republic by the Revolutionary Government under General Emilio Aguinaldo on June 12, 1898, marked our people’s declaration and exercise of their right to self-determination, liberty and independence.”

The Philippines has been a politically independent nation for nearly 75 years.