A Facebook user has deleted his public apology and changed his profile picture and name after receiving backlash for red-tagging a Filipino novelist on Tuesday.

Jefferson Lodia Badong made a public post where he apologized for accusing acclaimed writer Lualhati Bautista of being a part of the New People’s Army (NPA) in a since-deleted Facebook comment. 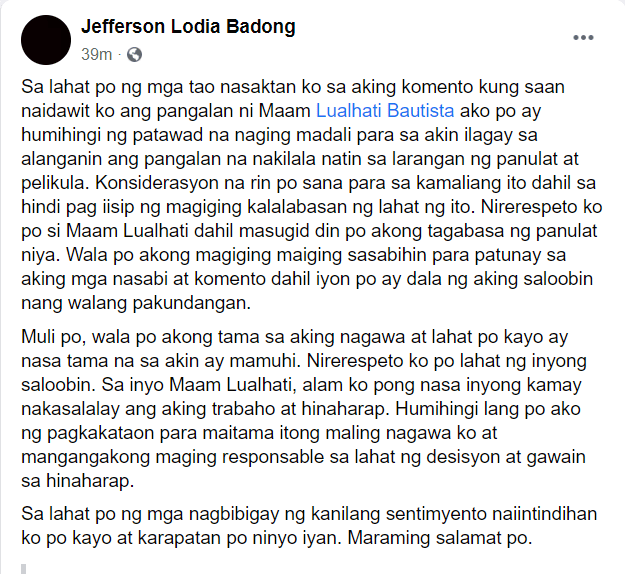 Badong retracted his accusation in his apology, stating that he has no substantial proof to link Bautista with the NPA.

The apology was deleted minutes after it was posted, with netizens rebuking Badong’s red-tagging and coming to Bautista’s defense in the comments section.

He also changed his profile name to Juliet Echo Tango and replaced all photographs of himself with black squares. His account has since been set to private, with Facebook users no longer able to view his former posts or send him messages.

Badong made his apology in response to Bautista posting a screenshot of his comment. The post went viral on Facebook, with netizens siding with the novelist.

Bautista then made a second post where she threatened Badong with a cyber libel case.

“Jefferson Lodia Badong, I have already taken a screenshot of your picture and your profile so i will have something to show just in case you suddenly deactivate your account. Because I had already talked to my lawyer and he said it is possible to file [a] cyber libel case against you if I want to go that far,” she added in her second post.

Minutes after the post gained traction, the veteran writer then posted a screenshot of Badong’s private message to her, who came to personally apologize for his statement. She also shared his public apology.

Bautista would then make one last post where she commented on Badong deleting his apology and changing his profile name.