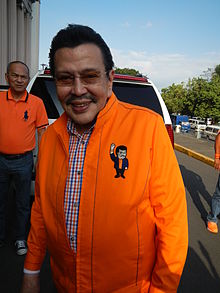 Former President Joseph “Erap” Estrada tested positive for the coronavirus disease 2019 (Covid-19) on Monday morning, according to his sons.

Former Sen. Jinggoy Estrada announced on his Facebook post that his father was diagnosed with Covid-19 and was sent to the hospital Sunday night.

“His condition is stable and I am asking for prayers for his immediate recovery,” he said in Filipino.

His other son, former Sen. JV Ejercito, also asked for prayers for their father through a separate Facebook post.

Erap Estrada, 83, was president of the Philippines from 1998 to 2001 until he was ousted due to corruption scandals.

In 2007, Estrada was convicted of plunder by the Sandiganbayan, but his successor, former President Gloria Macapagal-Arroyo, granted him executive clemency, giving him back his civil and political rights.

With that, Estrada ran and successfully earned the mayoral seat of Manila from 2013 to 2016.  He lost his Manila mayoralty reelection bid in 2019 to his erstwhile vice mayor and current Manila Mayor Isko Moreno Ronald dela Cruz