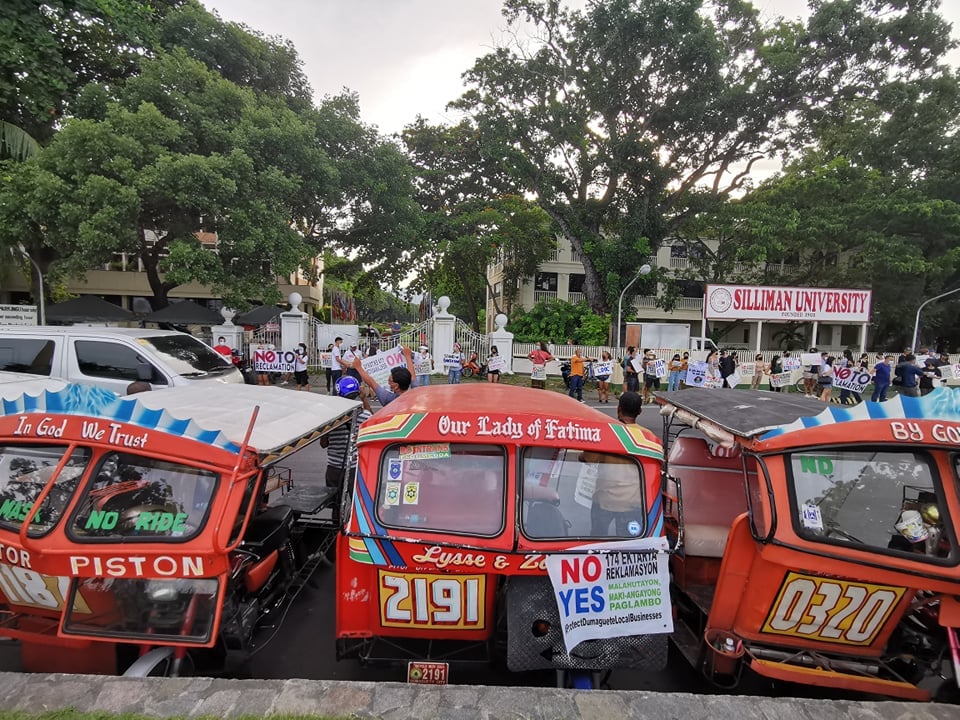 Scenes during a multi-sectoral protest against the proposed 174-hectare reclamation project off the coast of Dumaguete City. | Denniz Futalan

A multi-sectoral protest was held Friday in front of the historic Silliman University against the proposed 174-hectare reclamation project off the coast of Dumaguete City.

Organizers said the protest was in response to a statement made by City Mayor Felipe Remollo alleging that those who oppose the project are not residents of the city and are only protesting in social media.

Councilor Joe Kenneth Arbas of the city council’s minority bloc hopes the mayor would listen to the “voice of the people.”

“Dumaguete cares. Dumaguete people are one against 174-island,” Arbas said. “We will not stop until he backs out.”

Roy Baya, a motor cab-for-hire driver, and member of the Federation of Dumaguete MotorCab Operators & Drivers Association (FeDuMCODA) said they are against the P23-billion reclamation project because it would increase the cost of living in the city.

Baya worries that when the city’s classification is elevated to highly urbanized from the current third-class city, their livelihood would not be enough to support their family’s needs already struggling because of the raging coronavirus pandemic.

Former Vice Mayor William Ablong said they hoped that the mayor would listen and eventually “yield to the people” because they do not need the reclamation project.

Vilio Piñero, a local fisherfolk, also joined the protest since he wants Dumaguete bay that has supported his family for over two generations protected from the reclamation project.

Piñero, who has been fishing for over five decades off the shores of Piapil Village, debunked claims of pro-reclamation advocates that no corals and fish live in Dumaguete bay.

“The sea (of Dumaguete) is full of life because fishes are still very abundant. There is a lot of life there, and we should protect it,” Piñero said in Bisaya.

In an interview over DZXL with Ces Drillon, Remollo said the project would not push through if the Department of Environment and Natural Resources (DENR) would not allow it.

Remollo has been personally leading the information drive in the city to promote the project, ahead of the official consultation done by the city council dominated by his allies. Ryan Sorote