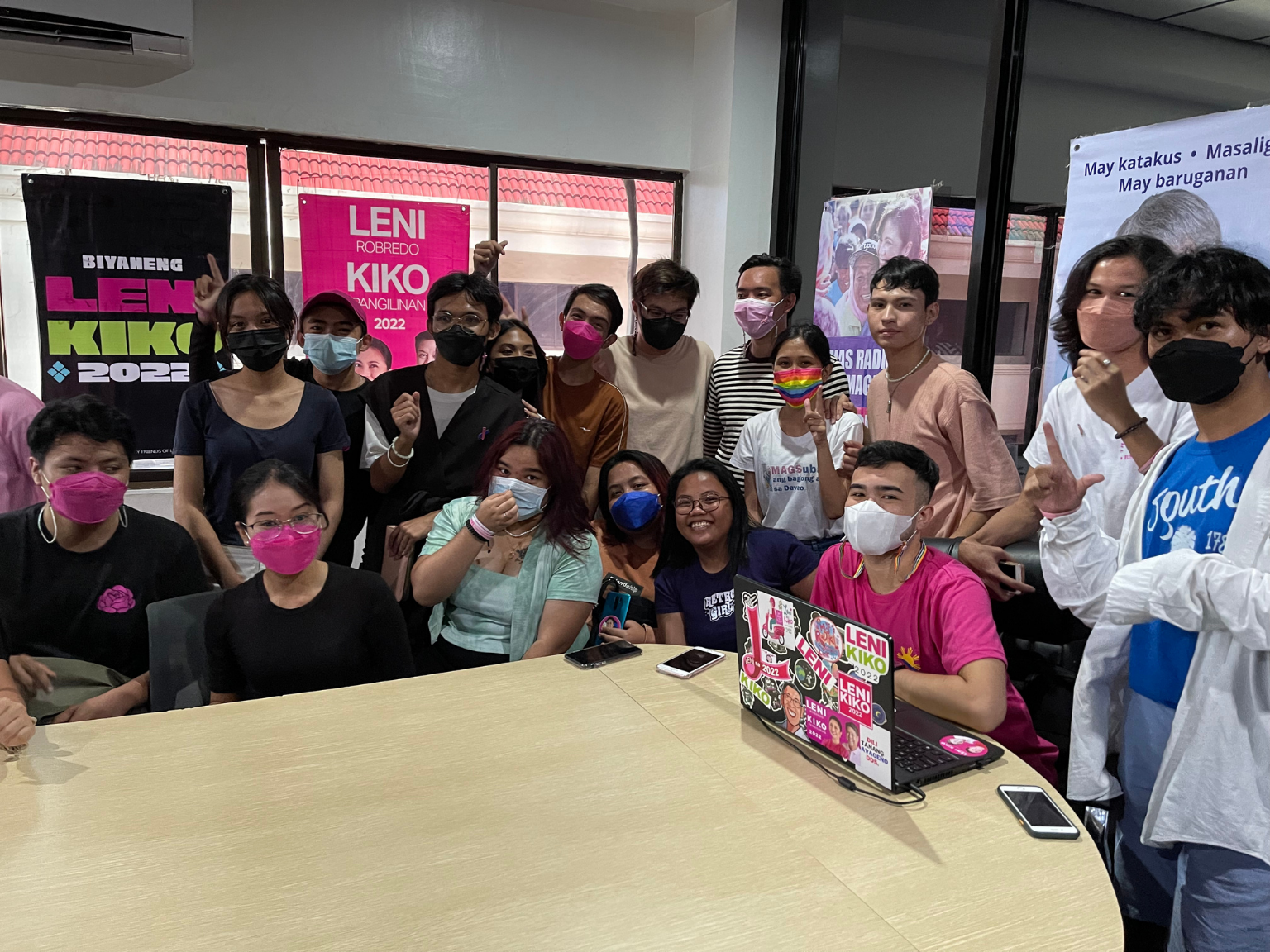 DAVAO CITY—Despite the likelihood of defeat, youth volunteers who campaigned for a challenger to President’s Rodrigo Duterte’s son and opposition presidential candidate Leni Robredo are vowing to continue the fight against dynastic politics.

“We don’t need one family leading the city,” said Rose, the leader of the group of volunteers for Ma. Victoria “Mags” Maglana, who is running to represent Davao City’s first district in Congress against the incumbent, Paolo “Pulong” Duterte.

Like Maglana, a longtime NGO worker, they are also campaigning for Vice President Robredo, whose core support includes young people.

Rose said her group had swelled to 300 members since she joined the Facebook pages “Davao for Leni” and “Davao Youth for Leni.” It’s their first time being involved in politics.

“The youth need leaders who will appreciate youth participation, especially here in Davao,” she said. “That’s what we like about [Mags Maglana], so even if we’re not paid, we decided to volunteer and wake up at seven every morning to meet here [at campaign headquarters].”

Maglana said most of her support came from unpaid volunteers, breaking the traditional practice of local politicians who usually shelled out millions to raise an army of campaign workers.

“This is a heavily volunteer-run campaign and ang pinaka-major source ng volunteers ay kabataan. So, nakakatuwa ‘yun kasi sinasabi natin na when it’s the youth that are running the campaign, there’s more energy, more optimism,” Maglana said in an interview.

The independent candidate said the “positive energy” brought by youth volunteers should help overcome the “political inertia” of Davao City.

In 2019, 41% of voters in Davao City’s first congressional district, which covers the city center and commercial hub, didn’t vote at all, Maglana said. Paolo Duterte, who had served as city vice mayor and village chief, handily won the seat once held by his father.

“And we can only guess why, but I’m willing to hazard, number one is because they didn’t like the options that were available to them at that time so they were for ‘none of the above,’ or even if they’re supporters of the incumbent, their thinking was that, he’d win anyway as he was running unopposed,” she explained.

Rose, who requested that her last name be withheld, admitted that campaigning for the opposition was rough.

They often found themselves on Facebook videos, the object of mockery and derision by Duterte supporters.

“Others were worried their parents would find out, so they’d be lowkey supporters at first and didn’t want to be in the photo documentation,” Rose said.

Many parents of youth volunteers backed the Dutertes, she said. “It’s more challenging here in Davao,” she said.

Rose said her group would continue to be active in politics beyond 2022, knowing that the political climate would be the same.

“I’m sure one of us here in Davao Youth for Leni will run for office someday and we will support them.” Felipe F. Salvosa II