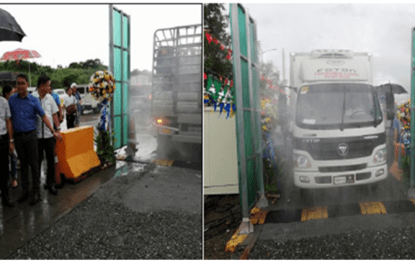 Agriculture Secretary William Dar together with other officials led the inauguration of the facility a measure to prevent the spread of the African swine fever (ASF) and other animal-related illnesses,

Situated at the South Luzon Expressway (SLEX) extension-STAR Tollway biosecurity and quarantine checkpoint in Sto. Tomas city, Batangas, the modern facility works like a carwasher with built-in power sprays found on both the floor and at both side vertical posts.

“This (facility) is very important para hindi maikalat ang virus dito (to prevent the virus from spreading here), from Metro Manila and any other areas…First of its kind in the Philippines, and we’ll see to it that we have more of this in those critical and strategic areas,” Dar said.

A minimum of 12 automated road bath disinfection facilities will be set-up on major entry and exit points in the Calabarzon region.

Initially identified were the major entry and exit points at the SLEX, STAR Tollway, Cavite, Rizal and in the San Juan-Sariaya by-pass road in Quezon.

“We have chosen this site because every month we expect more than 5,000 vehicles passing through this expressway and around 75 percent of these is animal transport carriers that are required to pass through this automated disinfectant spray facility,” said Calabarzon regional executive director Arnel de Mesa. (Jojo Mangahis)​