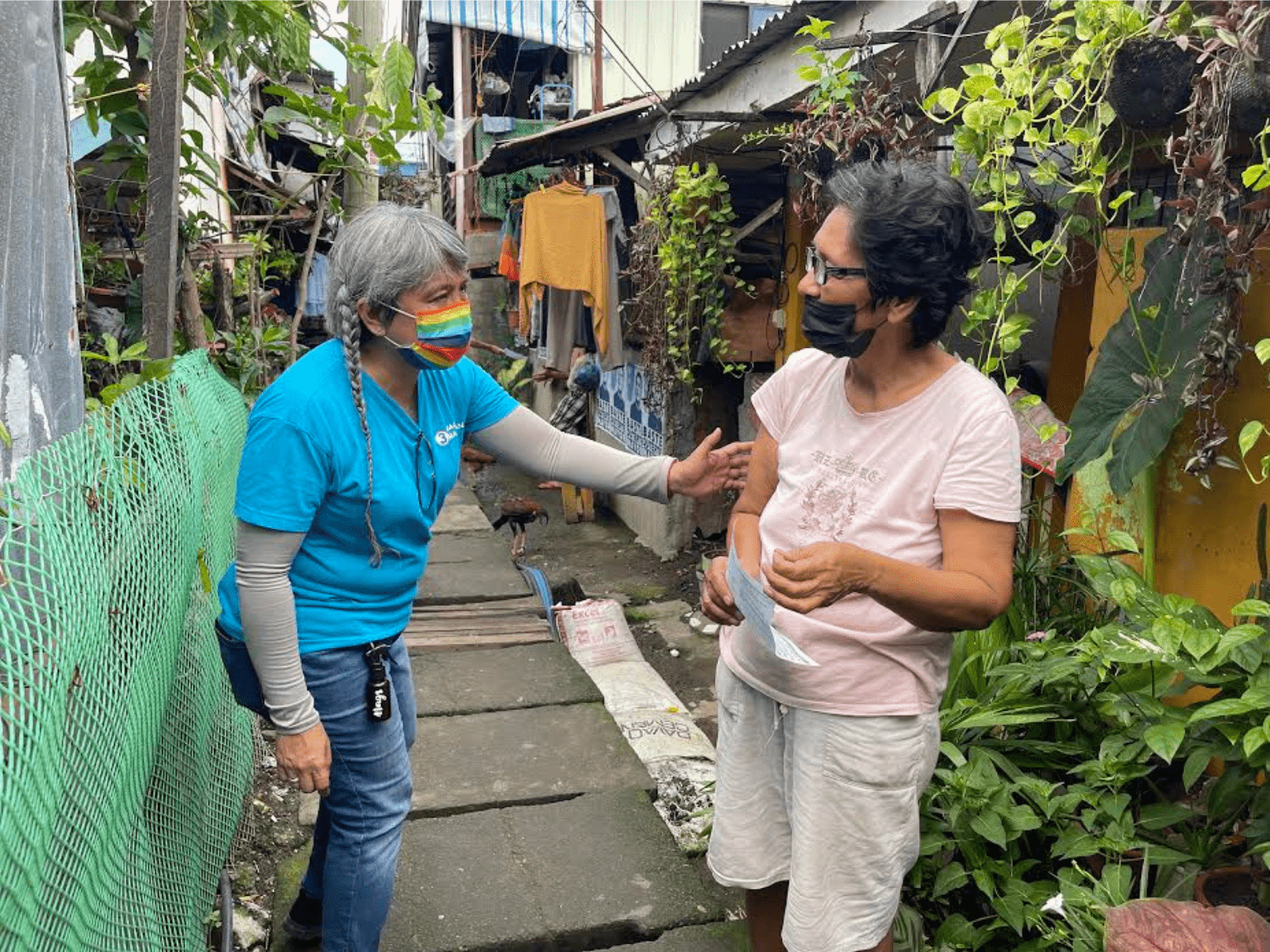 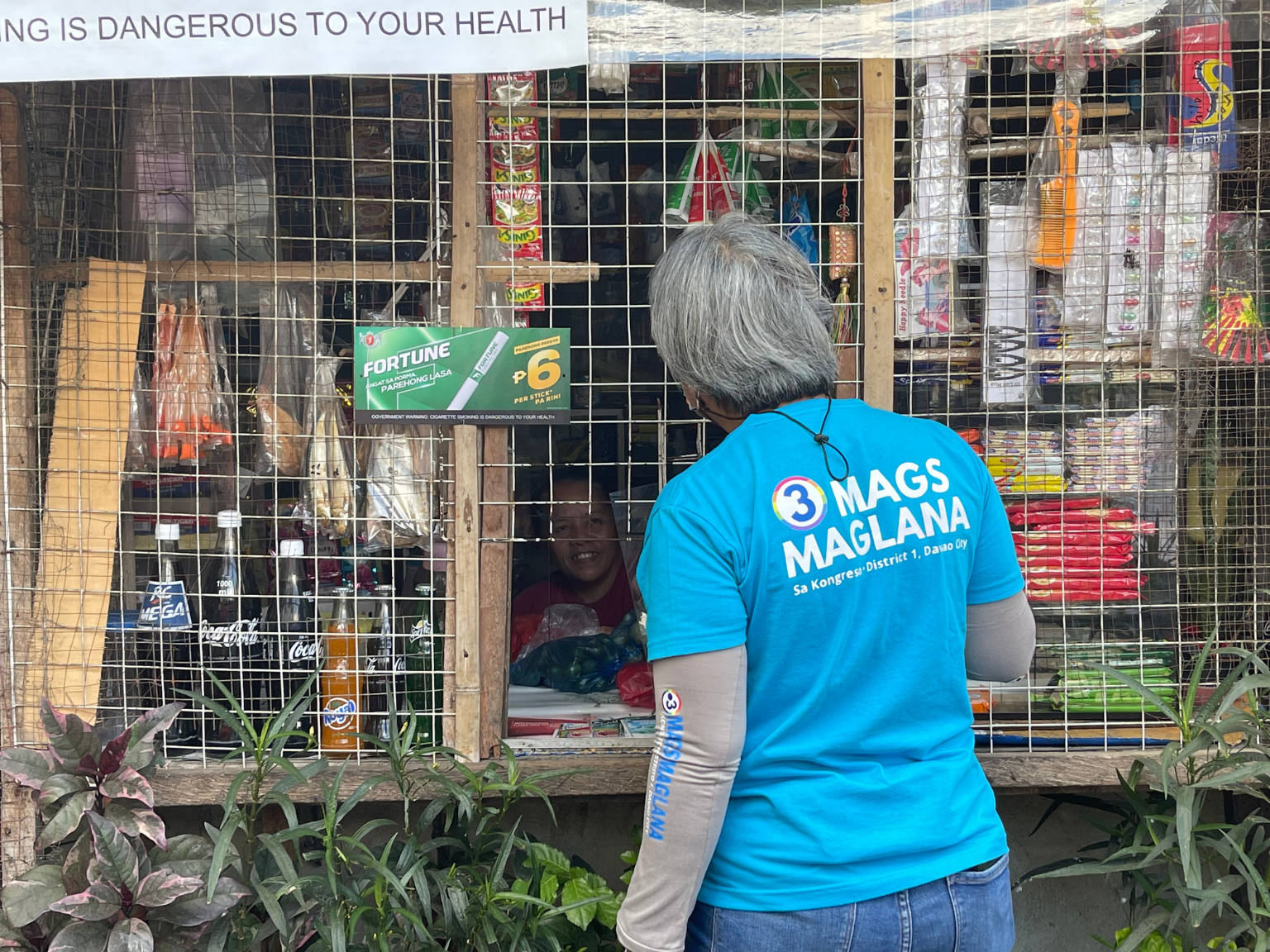 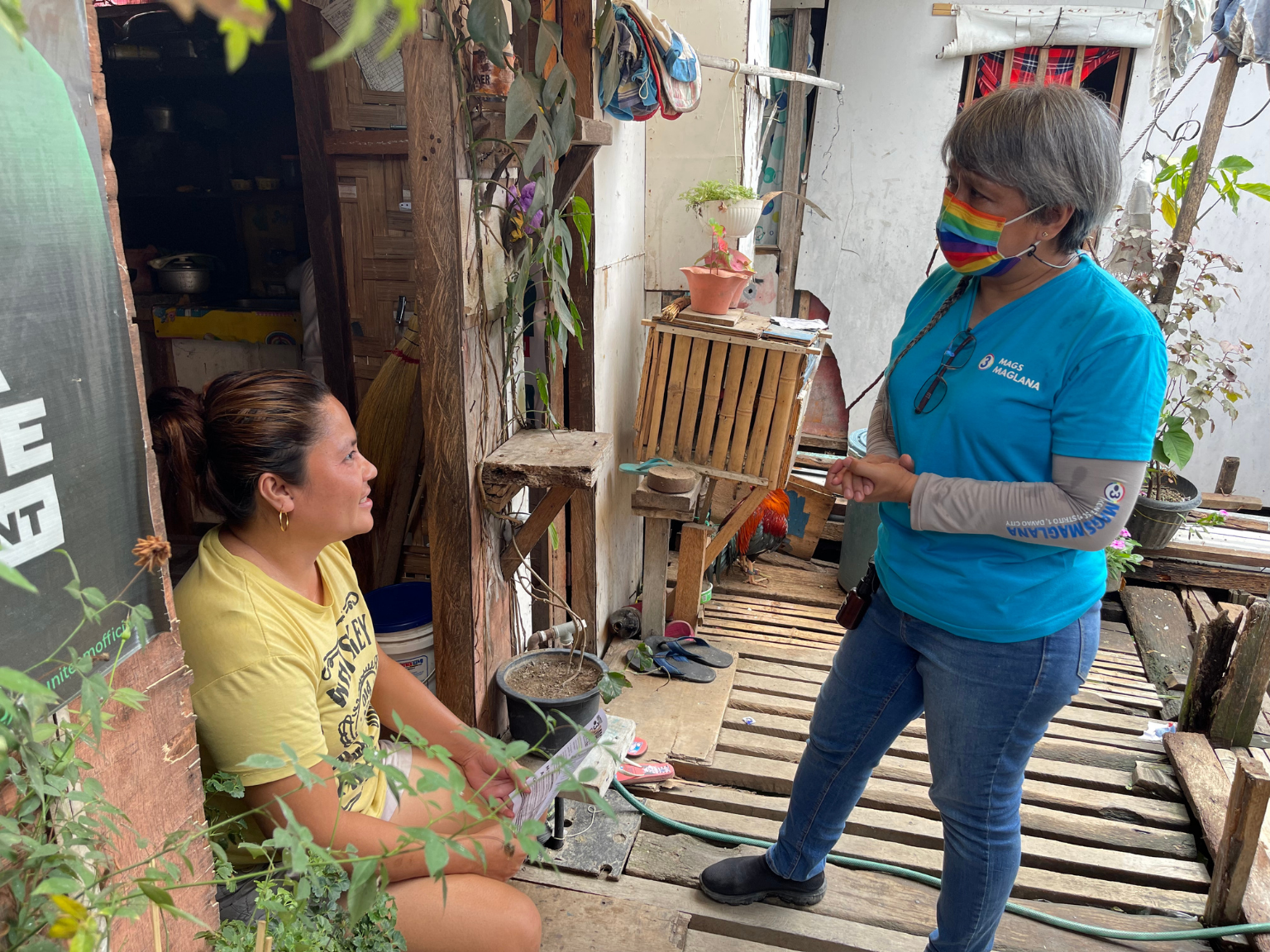 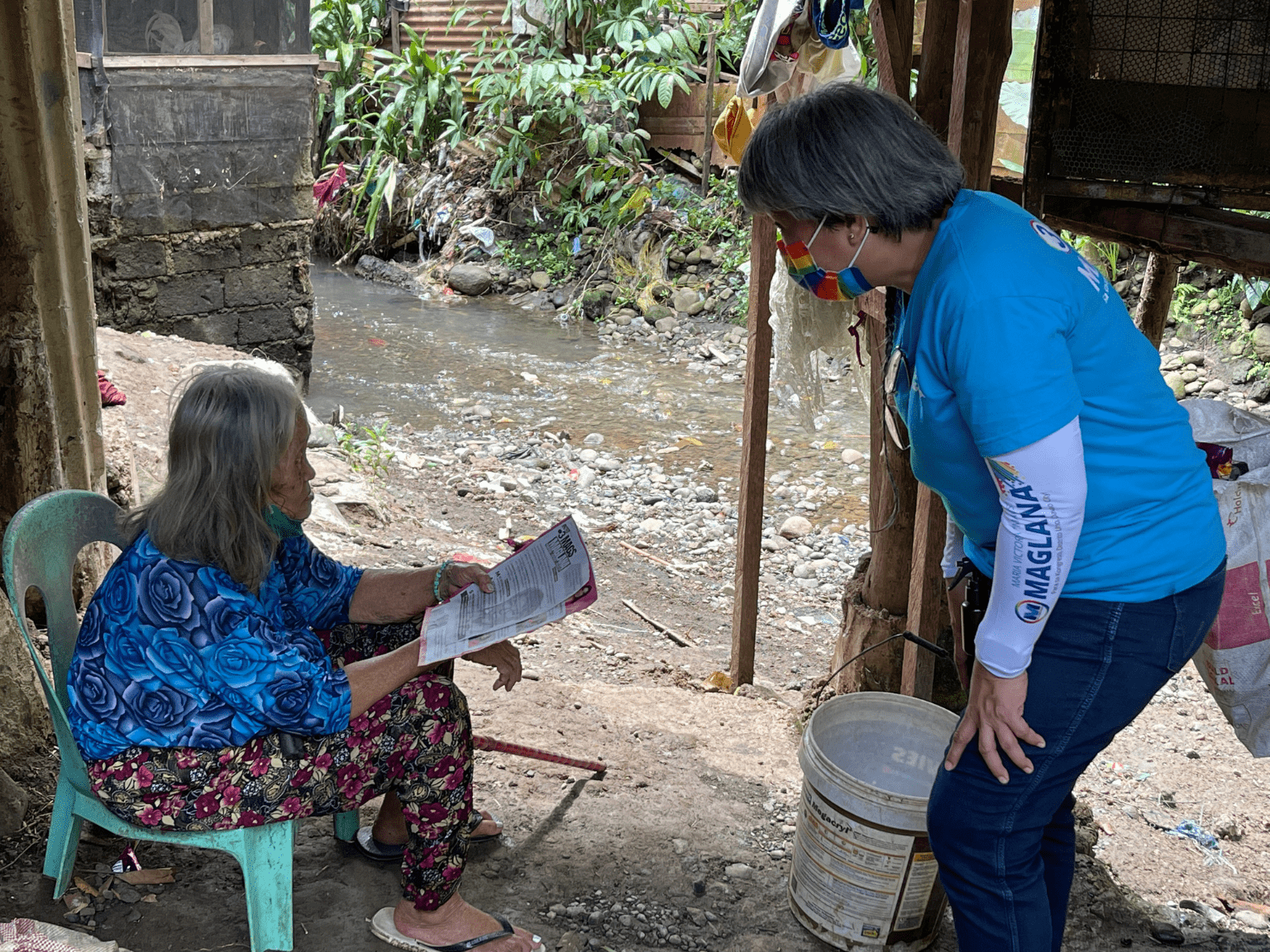 Longtime social development worker Mags Maglana, who is running against Rep. Paolo Duterte in Davao City’s first district, goes house-to-house to overcome a rather basic challenge in the campaign so far: many Davao voters don’t even know that the Dutertes have challengers.

DAVAO CITY—Accompanied by a lone youth volunteer, Maria Victoria “Mags” Maglana snaked through a narrow, mud-caked pathway descending into a row of rickety shanties, which then stretches uphill under crisscrossing lines of laundry.

The path could be treacherous: a misstep could send her sliding toward the foliage on one side or sinking into the stank on the other. But Maglana, a longtime social development worker used to the trek, proceeded casually, knocking on doors and speaking with anyone who cared to listen.

The president’s youngest son, incumbent Vice Mayor Sebastian “Baste” Duterte, is also facing a serious challenge for the mayoralty from lawyer Ruy Elias Lopez, a former congressman and a former political ally of the Dutertes.

Here in Sitio Bula, one of the seemingly forgotten communities in this largely progressive city, Maglana opted to spend her morning on April 19 meeting residents and offering her candidacy as an alternative.

Like Lopez, a veteran in the local political game who opted to unretire to take on the Dutertes, Maglana is facing a rather basic challenge in the campaign so far: many Davao voters don’t even know that the Dutertes have challengers.

“Maraming hindi nakakaalam na they have options,” she said, noting how she often had to mention that she’s running against the incumbent Pulong.

It’s a belief ingrained through 35 years of political dominance of the Dutertes in the city, beginning in 1987 when the family patriarch was appointed as vice mayor then first became mayor the following year. Duterte has since held a firm grip of local politics, keeping the mayoralty within the family except for 1998 to 2001 when he served as congressman.

A number of residents, when randomly asked, said they would vote for a Duterte, either for mayor or congressman, seemingly resigned to the reality that the family would keep its rule of the city in whatever capacity, whoever the challenger.

But Jason, 25, a resident of Sitio Bula, said he was open to considering other candidates “for a change,” not exactly as a criticism of the Dutertes, but simply to listen to what others had to offer.

“Ngayon ko lang po nalaman na may kalaban pala si Pulong,” he said, shortly after meeting Maglana, but added he didn’t know that Baste had a challenger in Lopez for the mayoralty.

This willingness to consider alternatives provides a slight opening for the likes of Maglana, who is entering politics for the first time, campaigning on a shoestring budget put together by volunteers.

The limited resources are seen in occasional campaign posters easily outnumbered by those of the Dutertes and their allies.

But the fact that the Dutertes have dotted the city with more posters suggests that they’re taking this campaign more seriously, said Maglana, whose campaign vehicle, a small silver multicab bearing her poster and an LGBTQ flag, is easily no match to the incumbent’s massive political machinery.

And where she lacks in campaign resources she makes up for with old-fashioned pressing of the flesh.

In many places in the city, she’s the only candidate knocking on doors. Most of the time she has to explain that she’s one of four bets for congressman.

Voters also do not seem to appreciate what a congressman’s job is.

Voters Maglana talked to readily admitted that they did not really stand to benefit from a bill renaming an airport that’s more than 900 kilometers away from Davao City.

“Our legislators should be able to come up with legislation, whether that’s a resolution or a bill, a law na totoong kapaki-pakinabang sa tao, at dapat kilala nila ‘yung mga tao ng kanilang distrito,” she said.

“It’s important that people know there is leadership in the district and that leadership is highly visible, not just through posters and tarps but, you know, directly experienced by people face-to-face.” 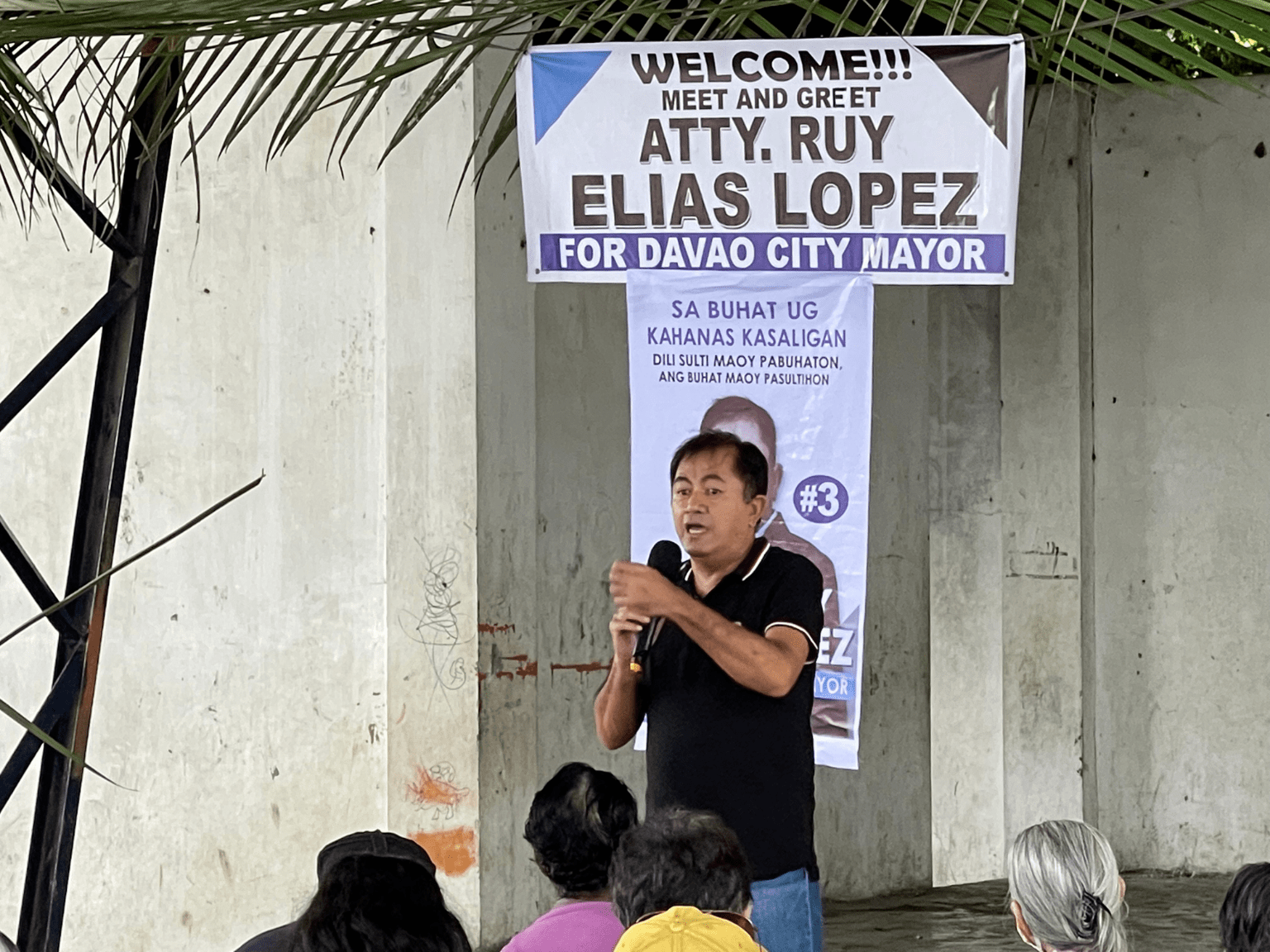 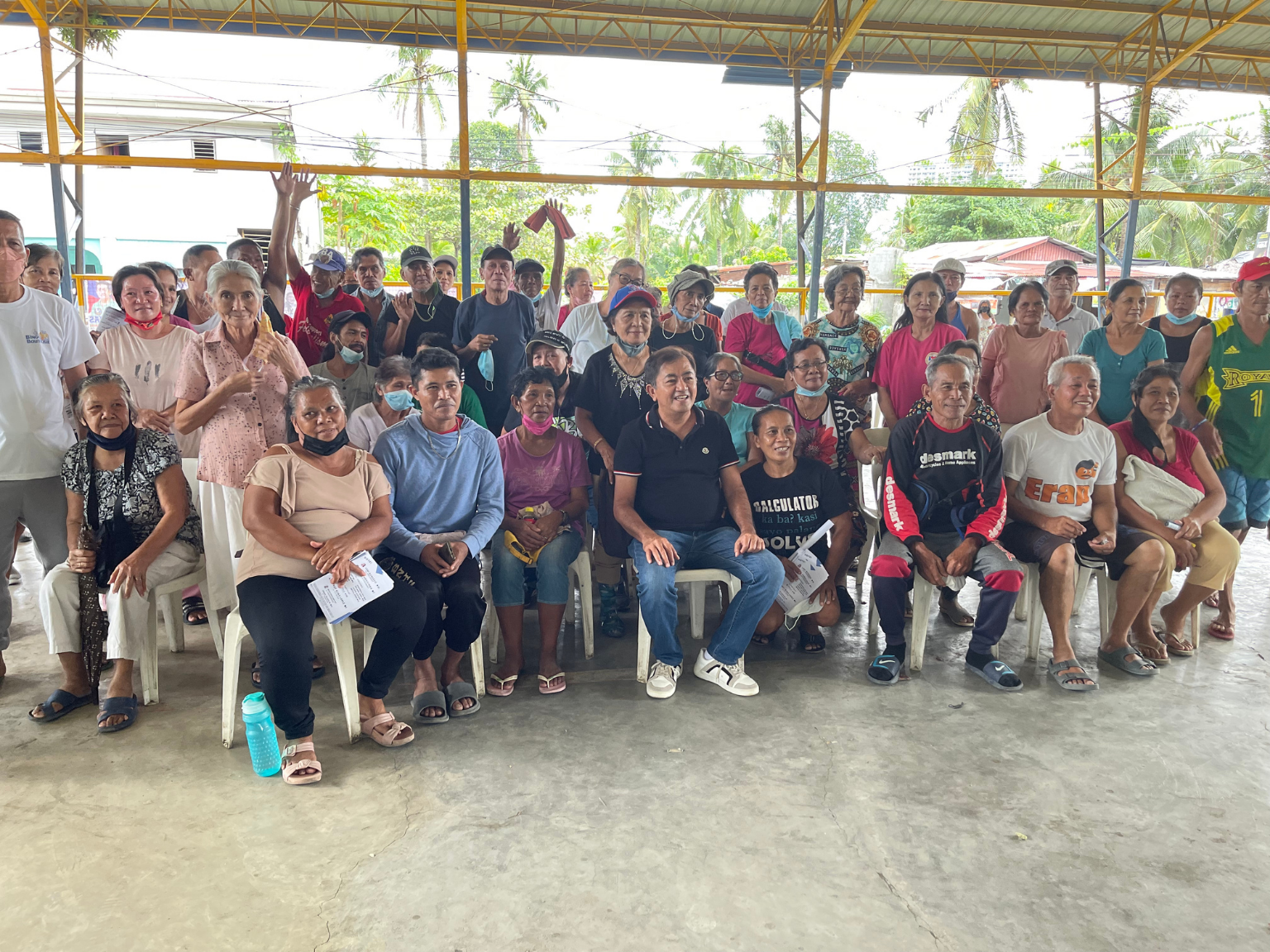 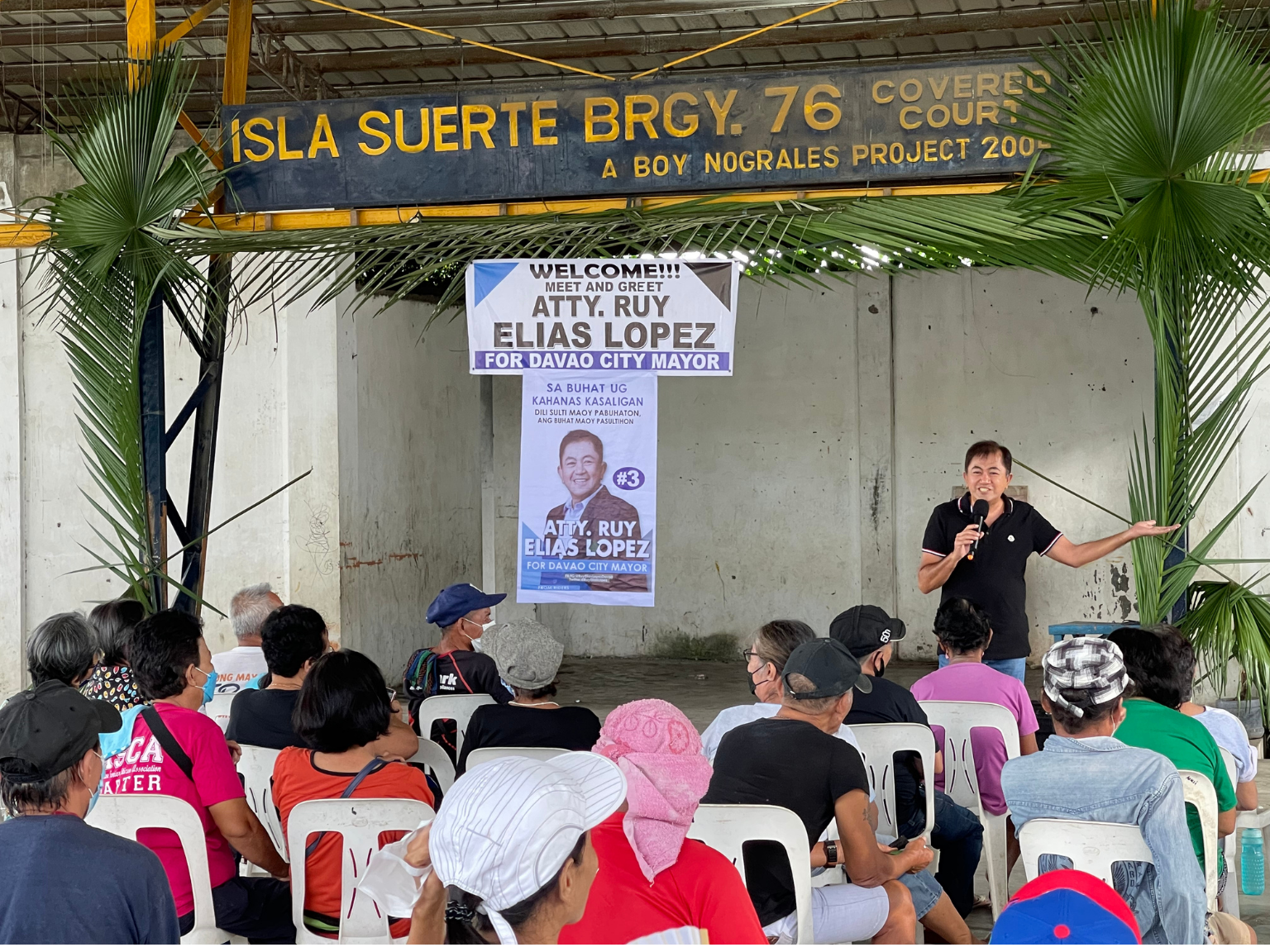 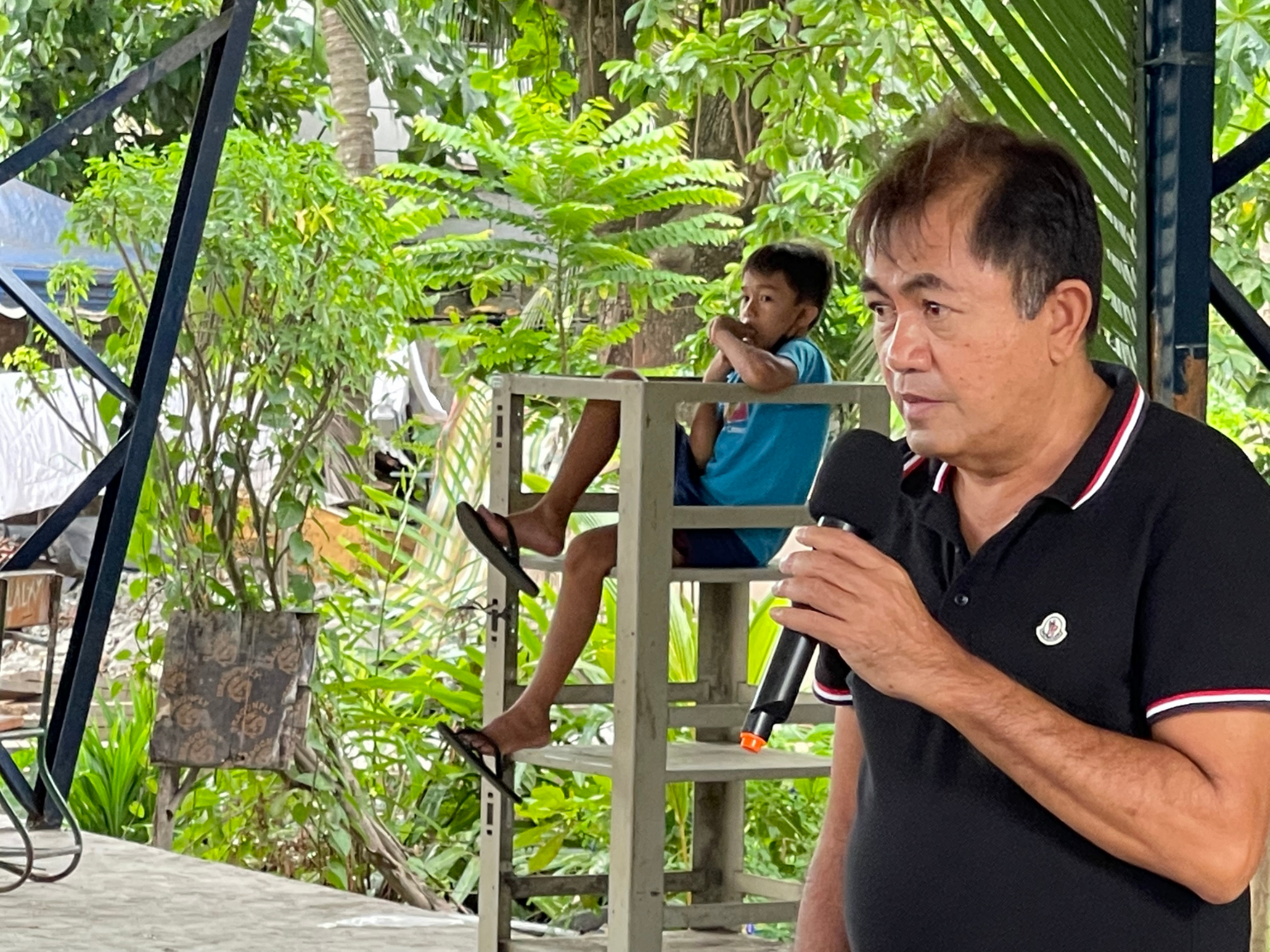 Davao City mayoralty candidate Ruy Lopez holds a small gathering with residents of Isla Suerte, where he jokes about how he’s better than his rival, the 34-year-old Baste Duterte, except in the looks department.

Lopez, 61, has a different approach to campaigning. Instead of going door-to-door, he prefers small-group gatherings or “pulong-pulong,” where he can explain his plans for the city in more detail. (Maglana prefers “tapok-tapok,” which has the same meaning but doesn’t inadvertently promote her rival, Pulong Duterte.)

As an old-style local politician, the ex-congressman believes campaigning is not all about big plans or platforms.

At Isla Suerte in Brgy. 76, a coastal area always threatened by flooding, Lopez joked about how he was better than the 34-year-old Baste Duterte except in the looks department.

But Lopez believes his superior qualifications as a UP-trained lawyer and three-term congressman gave him a boost over Baste, a surfer and reality travel show host who entered politics in 2019 when he ran unopposed for vice mayor.

At first, Baste filed for reelection as vice mayor, but substituted for the mayoralty when his sister, Sara Duterte-Carpio, decided to run for vice president under Ferdinand Marcos Jr., son of the late dictator under whom their grandfather, Vicente Duterte, served as cabinet secretary.

“You have to weigh it against the qualifications, and performance, and experience of Baste Duterte. Then if you weigh it properly, I think I have the advantage over him,” Lopez said.

Lopez drew a parallel between himself and Marcos’s chief rival, Vice President Leni Robredo, whose presidential bid he is supporting.

But carrying Robredo’s candidacy in Davao City is yet another challenge, Maglana admitted. The political fault lines are more pronounced in Duterte country, she said.

Some voters, she explained, were open to splitting their national and local tickets and could vote opposition for congressional posts.

Others switched to a dour face the moment they heard the name “Robredo.”

Coming from daily house-to-house campaigning however, Maglana suspects that many other voters sincerely yearned for change.

These voters, she said, had shied away from political involvement because of the poor choices given to them in previous elections.

That might change with the Dutertes facing challengers from national down to local posts.

“Parating sinasabi ng mga tao, ‘Hilom lang me ‘no, tahimik lang kami pero boboto kami from our kasingkasing, from our heart.’ And when voters speak from their heart, act from their hearts, who knows what will happen come May 9,” Maglana said.