House Speaker Alan Peter Cayetano is calling for a congressional hearing of Facebook’s deactivation of pages supportive of the administration but which the social media giant found violating their policy against inauthentic behavior and spamming.

In a Facebook post, Cayetano said the social media giant needs to address allegations that it is favoring one ideology over the government, promising that the investigation over Facebook’s actions over the controversial pages will be investigated as soon as the lower chamber finishes its plenary deliberations on next year’s budget.

“Upon passage of the 2021 Budget in the House of Representatives, rest assured that we shall initiate the appropriate proceedings in aid of legislation to truly determine if the reported actions of Facebook are detrimental to the Constitutional freedom of expression guaranteed to all Filipinos, regardless of political color, rich or poor, left or right,” he said.
The House Speaker admits that Facebook has been instrumental in making the Philippines “a much more democratic country.” Cayetano even thanked the social network for giving the House of Representatives to directly broadcast to the public most of its proceedings and hearings. He claimed that, “for the first time in history”, the lower chamber was able to allow the general public to “ask questions about the budget directed to the President’s alter egos” during the 2021 budget deliberations.

However, he notes with “grave concern” the deactivation of Facebook pages and accounts who are supportive of the government and various advocacies while allowing the “proliferation of Facebook accounts, pages and communities that directly call for the violent overthrow of a democratically elected government, or altogether support outright terrorism in our country and among our people”.

“Favoring one sector or ideology – especially one that has been tagged by the international community as a terrorist organization – directly contradicts Facebook’s core purpose of connecting all people globally in a free, open, and neutral marketplace of ideas.”

He calls the social media giant to take the time “to introspect and reflect on the soundness of its actions that tend to undermine the democratic principles upon which its phenomenal success is based.”

“Favoring one sector or ideology – especially one that has been tagged by the international community as a terrorist organization – directly contradicts Facebook’s core purpose of connecting all people globally in a free, open, and neutral marketplace of ideas.”

President Rodrigo Duterte on Monday told Facebook to explain its purge of accounts, which took down several government “advocacy” pages.

He claimed Facebook had succumbed to leftist propaganda critical of his administration.

“Facebook, listen to me. We allow you to operate here hoping that you could help us also. Now, if government cannot espouse or advocate something which is for the good of the people, then what is your purpose here in my country?” he said in a televised public address.

“Iyong left, ini-encourage kayo, then you believe in the left and to the point of almost make a sweeping move to [remove] websites ng health, military, we are fighting a war,” he added.

Duterte said Facebook should not prohibit a “fight of ideas” in the platform.

However, Facebook had in the past suspended the accounts of government critics, such as those of activist and comedian Mae Paner and PinoyAkoBlog ownerJover Laurio. Even veteran journalist Inday Espina Varona’s post in 2016 was deleted down by Facebook.

Last week, Facebook’s head of security policy Nathaniel Gleicher said in an announcement that the social media giant  had identified “several clusters of connected activity” that relied on fake accounts posing as fake citizens of target countries to post spam in groups, amplify their own content, and comment on various posts about naval activity in the South China Sea.

“We removed 155 accounts, 11 Pages, 9 Groups and 6 Instagram accounts for violating our policy against foreign or government interference which is coordinated inauthentic behavior on behalf of a foreign or government entity. This activity originated in China and focused primarily on the Philippines and Southeast Asia more broadly, and also on the United States,” he said.

The networks’ pages in Southeast Asia where the network focused most of its activity. posted about the following topics in Chinese, Filipino and English:

“This campaign took operational security steps to conceal their identity and location including through the use of VPNs (virtual private networks). Some of this network’s pages were previously removed for violating our inauthentic behavior and spam policies,” Gleicher said.

Gleicher added that the company “found this network as part of our internal investigation into suspected coordinated inauthentic behavior in the region. Although the people behind this activity attempted to conceal their identities and coordination, our investigation found links to individuals in the Fujian province of China.”

Below is a post from one of the pages that was taken down: 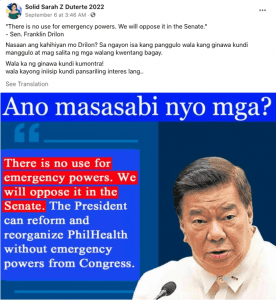 “This network consisted of several clusters of connected activity that relied on fake accounts to evade enforcement, post content, comment and manage Pages. This operation appeared to have accelerated between 2019 and 2020. They posted in Filipino and English about local news and events including domestic politics, military activities against terrorism, pending anti-terrorism bill, criticism of communism, youth activists and opposition, the Communist Party of the Philippines and its military wing the New People’s Army, and the National Democratic Front of the Philippines,” Gleicher said.

Gleicher said that their investigation found linking the Philippine military and Philippine police to the people behind these accounts even thought they “attempted to conceal their identities”.

Facebook’s anti Inauthentic Behavior policy states that the social media network doesn’t “allow people to misrepresent themselves on Facebook, use fake accounts, artificially boost the popularity of content, or engage in behaviors designed to enable other violations” of their Community Standards”  while its anti Spamming Policy states that it does not “allow content that is designed to deceive, or that attempts to mislead users to increase viewership. This content creates a negative user experience and detracts from people’s ability to engage authentically in online communities.”

“We also aim to prevent people from abusing our platform, products, or features to artificially increase viewership or distribute content en masse for commercial gain,” it continued.