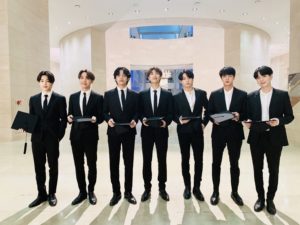 The group will be the youngest awardees in its 25-year history. (Source: BTS BigHit Official Twitter)

BTS will be one of the recipients of the prestigious James A. Van Fleet Award from The Korea Society.

The Korea Society is a non-profit organization dedicated to the promotion of “awareness, understanding, and cooperation between Korea and the United States.

The General James A. Van Fleet award is its highest honor, awarded “to one or more distinguished Koreans or Americans in recognition of their outstanding contributions to the promotion of the U.S.-Korea relations.”

The 2020 awardees include BTS, American veterans who served in the Korean War and The Korean Chamber of Commerce and Industry.

The award ceremony will be given virtually in a gala on Oct. 7, which will have the theme “Enduring Alliance, Expanding Horizons.”

BTS will reportedly accept the award along with Korean war veterans Charles Rangel and Salvatore Scarlato, and Yongmaan Park, chairman of the Korean Chamber of Commerce and Industry.

In 2018, BTS were also the youngest awardees of the Hwagwan Order of Cultural Merit at the Korean Popular Culture and Arts Awards. Ashley Cruz