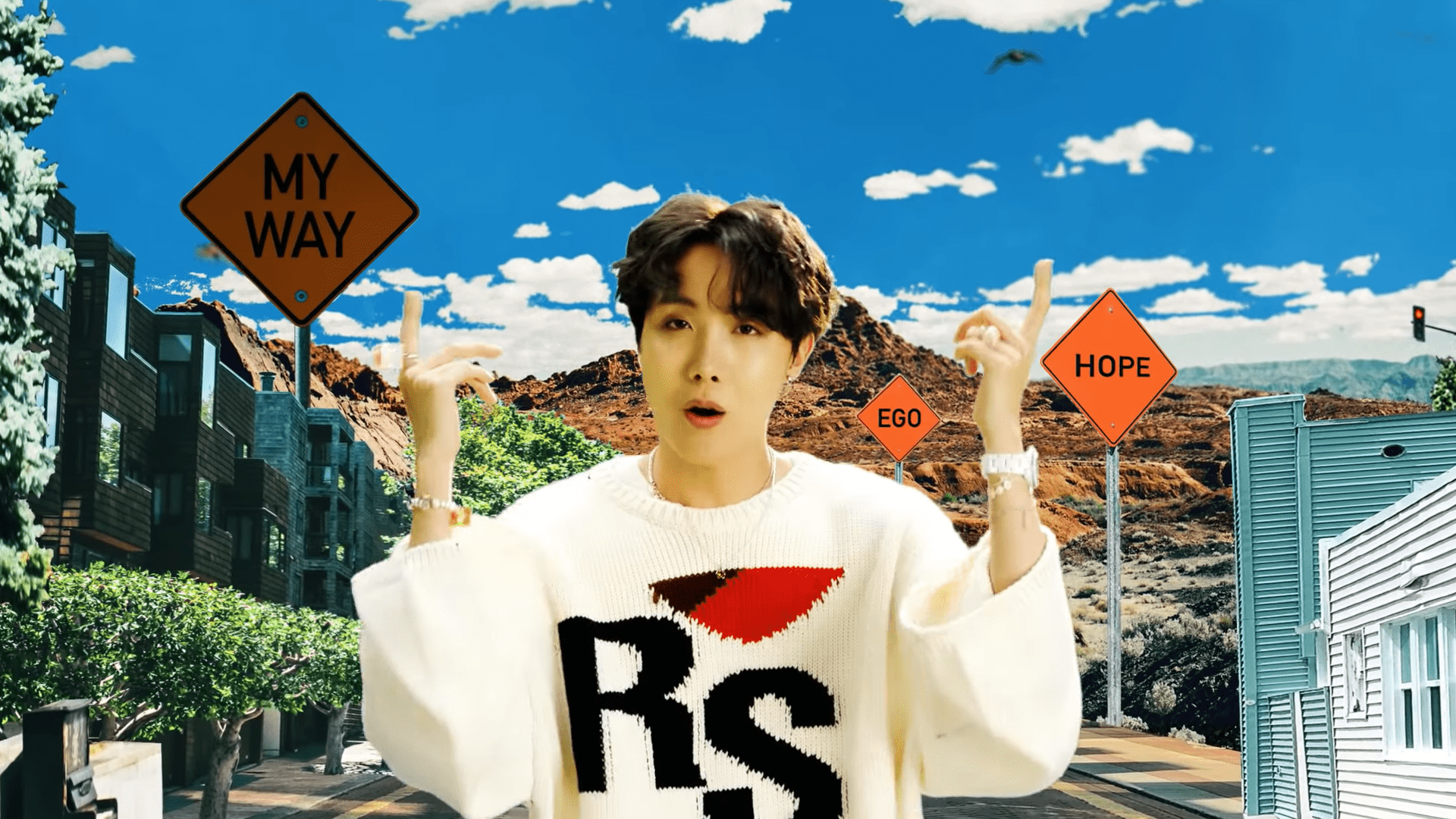 j-hope has come into terms with himself in “Outro: Ego.”

“Outro: Ego” opened with a kinetic typography and a sample of BTS’s single “2 Cool 4 Skool” from their debut album, followed by a glitzy montage of their songs for the past seven years, with j-hope rapping “I go back everyday / To me of yesterday” reminiscent of the days when he was just starting his career.

The music video sets a vibrant mood that blends well with j-hope’s distinct flow and the lively beats that match perfectly with its encouraging lyrics.

Throughout the song, j-hope embarks on a journey of self-acceptance despite being constantly haunted by his past and the hurdles he had to surpass to be where he is now.

“Almost forgotten memories return
Touch of the devil, fateful recall
I still wonder, why did they beckon again”

j-hope is hope personified in the trumpet-filled chorus as he encourages people to move forward by trusting themselves. “Look ahead, the way is shinin’ / Keep goin’ now / That way, way, way / Wherever my way / Only ego, ego, ego / Just trust myself.”

Ego is symbolized by many things in the music video but what stands out the most was his reenactment of his childhood, which was key to shaping his dreams. Here he talks as Jeong Ho-Seok, not as his persona j-hope.

“Life not of j-hope but Jeong Ho-Seok flashes by
It must have been full of regret with no hope till I die
My dancing was chasing ghosts
Blaming my dream, asking why I live and breathe.”

It’s a story of perseverance and the drive to make oneself whole without compromising the self (“Definite answer to the truth of the world / The one and unchanging me”).

Another interesting take is the apparent parallelism of J’s Tailor in the music video to the real-life story behind J’s Tailor & Cleaners based in New York.

Jay, the owner, began his journey in 1970 in Seoul, Korea. At 14 years old, Jay had no choice but to drop out of school and immediately seek employment to eat, find housing, and provide for himself. Read more of his story below! 📝https://t.co/TJeJl01eKd pic.twitter.com/OXUHAvLO0g

The company tweeted a brief history about its owner, Jay, who coincidentally shares the same nickname with j-hope. It was a classic success story of someone who started from the bottom doing the only thing that he is passionate about. It’s a story so close to j-hope’s journey from being an underground dancer in a small town in Gwangju to becoming one of the most successful artists of his generation.

In society, ego has a negative impression and has been somewhat associated with being arrogant or cocky, but “Outro: Ego” has shed a light on its true essence.

Like what Dr. Murray Stein said in Episode 53 of Speaking of Jung: Interview with Jungian Analysts podcast by Laura London, “the Ego is our conscious self and just having ego is part of human nature.”

Towards the end, j-hope shows his awareness of the things that make up his own ego so as not to lose sight of his identity.

As an outro, “Ego” is a befitting celebration for finding oneself beyond the pressures of the socially-acceptable persona and despite the fears of accepting our own shadows.

With “Interlude: Shadow” by Suga and the single “Black Swan” released 2 weeks ago, BTS is giving fans a closer look into their identities beyond the global artists that everyone knows; and this could be the most raw and vulnerable album yet. Can February 21 come faster?