Before Covid-19, there was the bubonic plague

While following online the spread of the corona virus worldwide, I decided to go back to Warren H. Carroll’s monumental History of Christendom to see how the 14th century Christians dealt with the deadly bubonic plague or Black Death.

The plague, writes Carroll, was carried by fleas upon rats who then jumped to human hosts, where it incubated for six days before killing its victims. Like Covid-19 for now, It had no known cure, and its first symptom—a large black boil—often killed within 48 hours.

In colder climates, the bacillus often became pneumonic plague, which spread from person to person like the common cold, but killed an appalling 95 percent of those who contracted it. As in Covid, the Black Death first struck in populous China.

By 1339, Carroll continues,  the plague had crossed central Asia to Samarkand; by 1346 it was in Crimea and the Caucasus. Mongols besieging Genoese in the trading city of Caffa on the Crimea contracted it and passed it on to the besieged; when they fled to Sicily they brought the bacillus with them, nearly depopulating the city of Messina in October 1347.

From there, it spread with appalling rapidity and mortality throughout almost all of Europe. By the end of December that year it had appeared in the port cities of Genoa, Pisa and Venice and in Constantinople; in February 1348 it reached the French port of Marseilles. In the Italian city of Siena, more than half the population died in the spring and summer of 1348. The chronicler Agnolo di Tura wrote to say he had to bury his own five children with his own hands.

When Avignon was stricken in March 1348, Pope Clement VI, on the advice of his physician, “retreated to his chamber, saw nobody, and spent all day and night sheltering between two enormous fires.” In June he left the city to take refuge in his castle at Valence. The mortality in Avignon exceeded 50 percent; 400 people died every day, and from March 14 to April 27 that year, 11,000 plague victims were buried in a cemetery provided by the Pope. One third of the college of cardinals died, as did Petrarch’s beloved Laura; 62,000 deaths left 7,000 Avignon homes empty.

From the port cities in the Mediterranean, the plague surged northward through France and Bavaria and leaped across the English Channel by the end of June. In Paris, the plague claimed 800 lives every day, wiping out a third of the population. In London, it switched from the bubonic to the deadlier pneumonic variety, and killed 30,000 in the winter of 1349. It later devastated Norwich, and England’s second largest city at the time never recovered its 1348 population for 250 years. 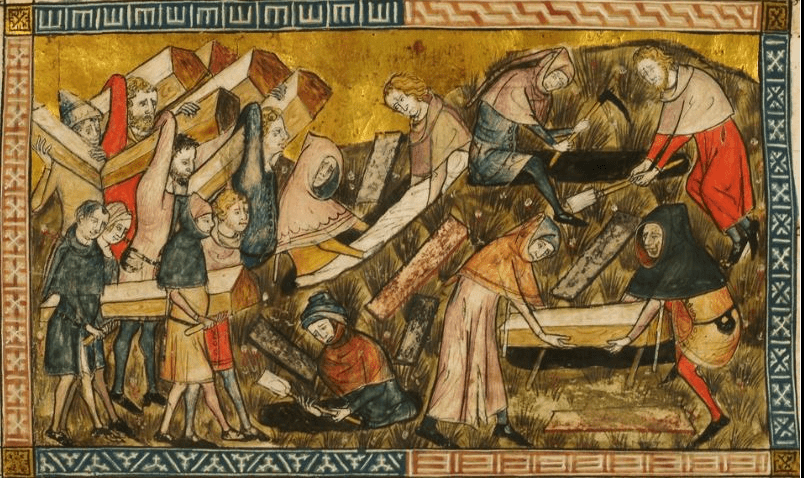 In the spring of 1349 the plague arrived in Ireland. In May that same year, a London ship entered the port of Bergen in Norway. It did not tie up at any dock and drifted in the harbor, so it had to be boarded by the authorities. But when they boarded the ship, they found every man on board dead. This was how Scandinavia got the plague. By the end of 1350, King Magnus II of Sweden would say, “Because of the sins of men, God had struck the world with the punishment of death.”

In March 1350, the plague claimed its most illustrious victim: the King of Castile, Alfonso XI, “the Avenger.” He had come to join his men in camp against the Muslims before the Rock of Gibraltar and was struck down with black boils like any common soldier.  He died on a Good Friday and was succeeded by his 16-year-old son Pedro, who would bring misery and disaster to his country and set back the Reconquest from the infidels for nearly150 years.

In 1353 the plague reached Europe’s remotest city, Moscow, where it killed Grand Duke Symeon and Archbishop Theognost, among others. This marked the end of the plague’s first visitation. It would return in 1361, killing an estimated 20 percent of the population in England and Normandy, Florence and other Italian cities. It came again in 1369, killing 10 to 15 percent, and then periodically every four to 12 years until the end of the 14th century and on through the 15th, with each attack averaging a mortality of 10 percent.

According to Pope Clement VI’s investigations, by 1351, 23,840,000 people had died of the plague in Catholic Europe—about 31 percent of its total population. From the episcopacy and clergy alone, 25 archbishops and 207 bishops had died, and many more clergymen. But there is no mention in Carroll’s narrative about the Church having to close its doors to any actual or potential victim of the plague seeking the grace and mercy of Christian salvation.

At the height of the plague, narrates Carroll, the bishop of Bath and Wells told his priests, if they could not give confession to the dying, they should ask the faithful, in that unparalleled emergency, to give confession to one another. This seemed like a strong witness to the Lord’s words, “Thou art Peter, and upon this rock I will build my church and the gates of hell shall not prevail against it” (Mt 16:18).  Verily, closing the church doors and cancelling the daily Holy Mass was never considered an option.