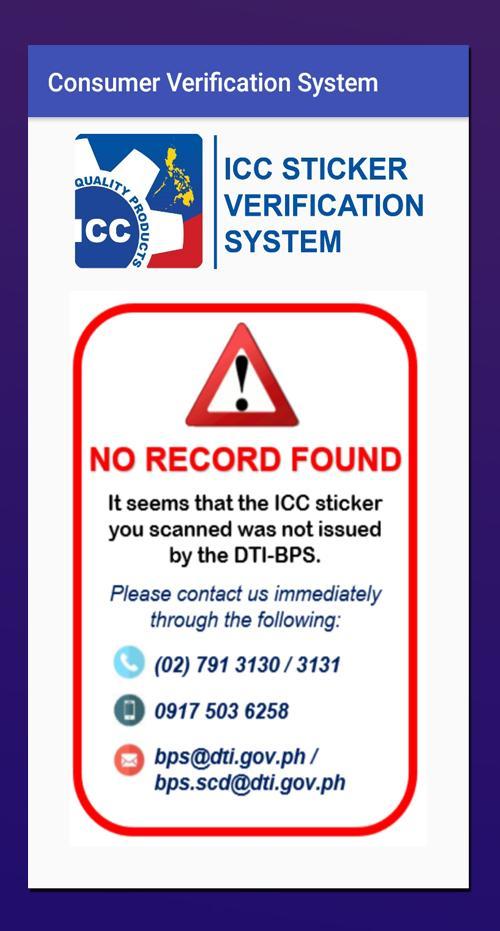 Consumers can now use an app to verify if the Department of Trade and Industry (DTI) quality seal attached on imported products they purchased is genuine.

The Import Commodity Clearance (ICC) verification System Application technology was launched by DTI wherein ICC stickers, which are attached to imported products, help safeguard the welfare of the consumers against fake and below-par products.

Alexandro M. Novora, DTI’s Trade and Industry Development specialist for Albay, says the sticker is proof that “the product, before entering the country, had undergone and passed the tests from the Bureau of Philippine Standards.”

He adds, “The manufacturer will be given a certification and ICC sticker which shall be placed on the product.”

The app can be downloaded by Android users in PlayStore.  It is not yet available for iPhone users.

The ICC verification technology is DTI’s response to several cases of illegally imported products bearing bogus ICC stickers but it only captures those issued with ICC stickers starting August 2018.

Connected to the server of the Bureau of Philippine Standards, it works through a Quick Response (QR) code scanner which displays the company name, address, brand name, model and type of the products.

Novora assures the public that DTI remains tough in enforcing the Philippine Standards Law that guarantees quality products, whether manufactured locally or imported, prior to local market dissemination.

He bared that mandated to comply with the country’s standards law are close to 88 products such as electronics, mechanical or building and construction materials, and chemicals such as oxygen in hospitals and even fire extinguishers. (Jojo Mangahis)