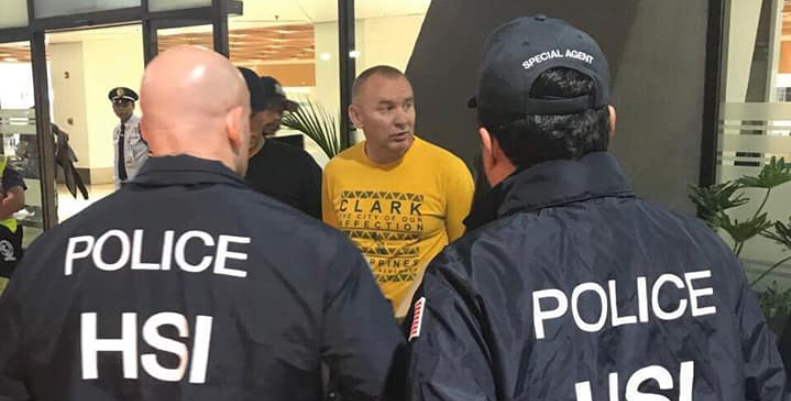 In photo is alleged American pedophile Piotr Kmita, 43, in handcuffs after being arrested in a joint entrapment operation of the Bureau of Immigration and America’s Homeland Security. BUREAU OF IMMIGRATION PHOTO

Authorities on Monday arrested a suspected American pedophile while meeting a female minor who was his would-be victim at the Ninoy Aquino International Airport (NAIA), the immigration bureau said.

In a press release, Bureau of Immigration (BI) Port Operations Division Chief Grifton Medina identified the suspect as Piotr Kmita, 43, who was apprehended in an entrapment operation after his arrival at the NAIA  Terminal 1 via a China Eastern Airlines flight from Pudong, China.

Kmita is facing charges for violating the Republic Act 10364 or the expanded antitrafficking in persons act which penalizes the act of “procuring a child for prostitution and obtaining a person for the purpose of prostitution, pornography or sexual exploitation.”

He will be deported back to the States after the criminal charges filed against him are resolved.

However, if found convicted, Kmita must first serve his sentence here before he could be sent back to the US.

The Philippine National Police’s Women and Children Protection Center in Pampanga will be taking over the case as this is where the would-be victim hails.

BI-NAIA Border Control and Intelligence Unit Head Bienvenido Castillo said that agents from the United States’ Homeland Security Investigation (HSI) sought the assistance of BI after Kmita was discovered to have engaged in sexually charged conversations with the victim he befriended online through Facebook.

“The HSI then relayed the information to the PNP regional office in Pampanga, and we jointly conducted the operations to intercept Kmita upon his arrival in Manila,” Castillo said.

Meanwhile, BI Commissioner Jaime Morente applauded the joint effort of the various agencies that worked together to “successfully weed out undesirables like him,” saying that the presence of Kmita “here poses a serious threat to our women and children.” (PacificTimes)