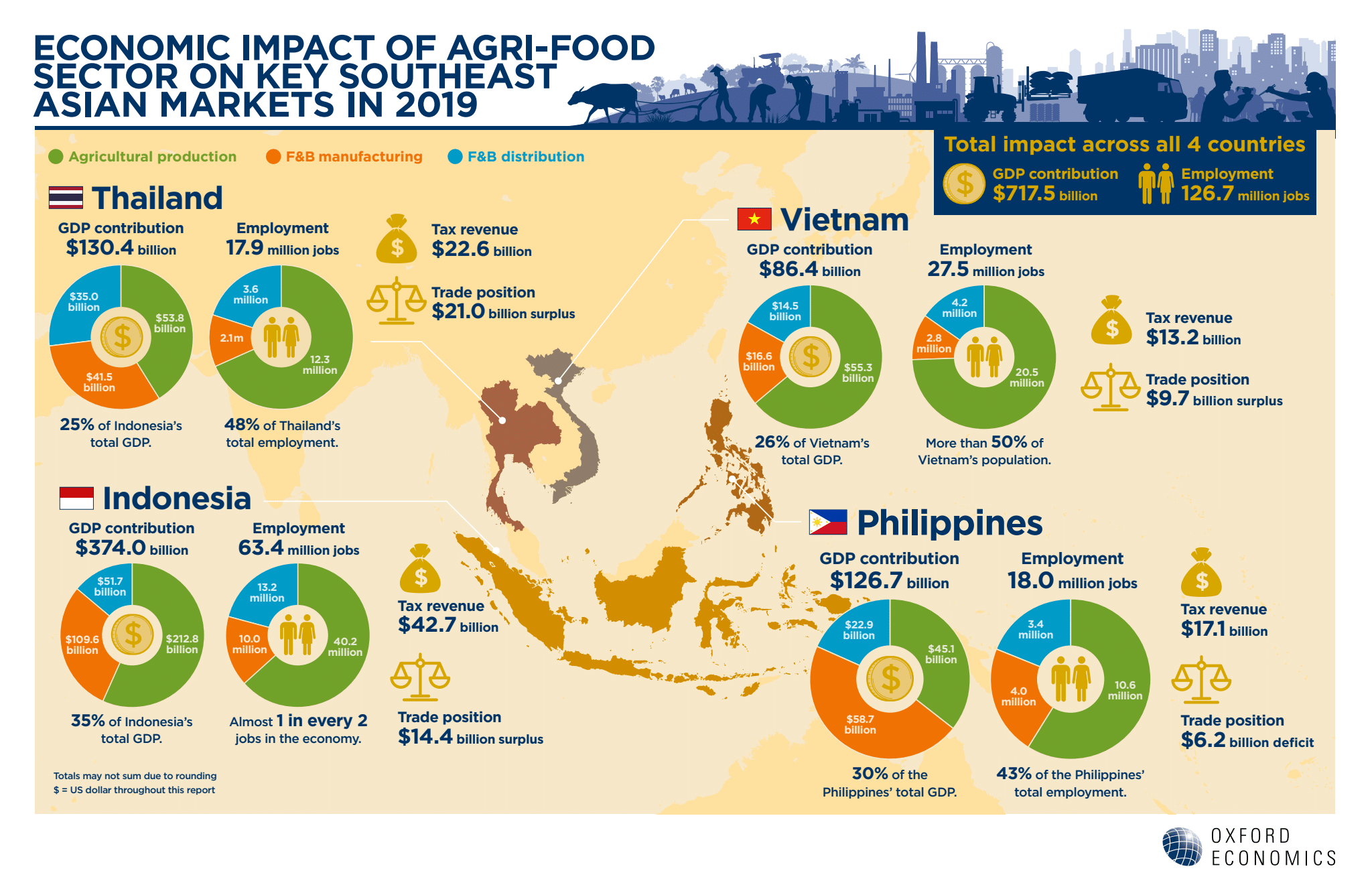 The economic impact of agriculture and food industries in Southeast Asia (Oxford Economics).

The agriculture and food sectors will be the main drivers of post-pandemic economic growth, a study has found.

“The sector holds the key to over 18 million jobs and P6.1 trillion in GDP contribution and as such, is undeniably an economic powerhouse and an important driver of local employment opportunities,” Philippine Chamber of Food Manufacturers Chairman and President Elizabeth de Leon-Lim, said.

Food manufacturing industries contributed the most to the 2019 agri-food GDP, earning P2.84 trillion in 2019. This was followed by the agriculture sector with P2.19 trillion and food distribution companies with P1.11 trillion.

The agri-food sectors sustained 18 million jobs in 2019, which was 42.7% of the national workforce. The bulk of workers came from the agriculture sector with 10.6 million workers, followed by food manufacturing and distribution with 4 million and 3.4 million workers, respectively.

The study projected that the agriculture and food sector GDP would contract by four percent, or a P262.1-billion loss. About 390,000 workers in these industries might be displaced.

The Philippines entered into a recession in 2020, with its GDP plunging by 9.6 percent, the lowest since 1946.

Aside from the Covid-19 pandemic, this contraction was brought about by natural disasters like the eruption of Taal Volcano and the onslaught of several typhoons last year.

The study also warned that risky fiscal adjustments might hamper growth in the agri-food sectors.

“It is important that policymakers provide the most conducive conditions for the agri-food industry to successfully rebuild itself, and that any fiscal policy implemented is carefully planned, designed, and communicated,” he said.

To promote economic growth in these industries, the report suggested that the government (1) educate the agri-food industry, (2) promote regulatory standards over taxes and (3) maintain constant communication with the industry.

The Senate on April 15 passed a resolution urging Duterte to withdraw the EO, which, critics warned, could kill the hog industry already facing the crises of African Swine Fever and the Covid-19 pandemic.