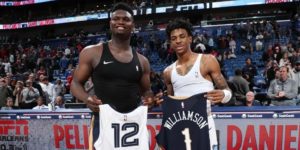 Zion Williamson (left) and Ja Morant (right) exchange jerseys after a game between the New Orleans Pelicans and the Memphis Grizzlies (Photo from NBA.com)

The NBA on Sunday (PH time) unveiled the finalists for the 2019-2020 season’s six major awards: Most Valuable Player (MVP), Rookie of the Year, Defensive Player of the Year (DPOY), Sixth Man of the Year (6MOY), Most Improved Player and Coach of the Year.

In July, members of the media submitted their ballots for the awards, which will recognize players’ performances in games from October 2019 to March 2020.

Morant, the second pick in the 2019 NBA Draft, shocked the league as he carried the Memphis Grizzlies to the playoff race. He has averaged 17.6 ppg, 6.9 apg and 3.5 rpg. He has led rookies in scoring and assists.

Nunn, an undrafted point guard, was one of the biggest surprises this season for the Miami Heat. As starting point guard, he has tallied 15.2 ppg, 3.3 apg and 2.7 rpg in 29.2 minutes per game.

Budenholzer was last year’s COTY. His Milwaukee Bucks have remained one of the most dominant offensive and defensive teams in the NBA. He has led the Bucks to the best record in the league the past two seasons.

After Kawhi Leonard left the Toronto Raptors to join the Los Angeles Clippers, expectations were low for the Raptors. But under Nurse, Siakam became an all-star, the likes of Terence Davis, OG Anunoby and Norman Powell had astonishing seasons, and the Raptors have remained as possible title contenders.

Ingram was part of the deal that sent Anthony Davis to the Lakers. As the New Orleans Pelicans’ go-to guy, he has averaged 23.9 ppg, 6.1 rpg and 4.2 apg.

As if Dončić’s rookie season wasn’t stellar enough, his second season was even better. The Slovenian sophomore leads the league in triple-doubles with 17, and is averaging 29 ppg, 9.4 rpg and 8.8 apg, while pushing the Dallas Mavericks to clinch a playoff spot in the West.