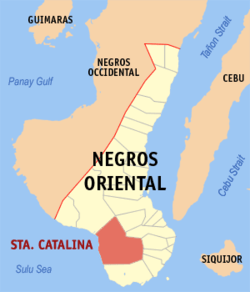 Two of their companions, namely; Camille Binghil Fabro, 18, and Rhena Gaudia Fabro, 18, also living at Sitio Pinamgimnan, survived and were rushed at a local hospital. Camille Fabro was later relocated to a hospital in Dumaguete CIty for further treatment.

According to initial reports, the family went for a swim at sea when they faced the vicinity of the breakwater in Sitio Guba and panicked that caused the misfortune of the two fatalities.

The Sta. Catalina Police Station received a phone call at around 1:15 p.m. on Wednesday informing them of the tragedy at Sitio Guba in Barangay Poblacion Sta. Catalina. The police immediately responded by conducting a search and rescue operation.